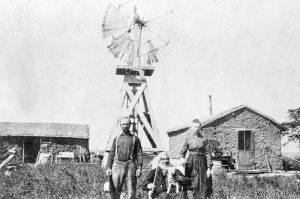 On April 8, 1881, a post office was established near the center of Thomas County. At that time, area homesteaders living under harsh conditions in sod houses demanded a town to provide lumber and other provisions to incoming settlers. J.R. Colby, a Civil War veteran, local land assessor, and preacher, was one of those homesteaders, and in April 1884, he obtained a patent to establish a town.

The Townsite Company secured Union Pacific Railroad land approximately three miles north of the post office in March 1885. The following month, the Kansas Secretary of State issued the Town Charter. The town was named for J.R. Colby, and he also received a business and residence lot in the new town.

The first buildings were sod homes, some of which offered room and board. Another one housed the shop of the first newspaper in the county — the Thomas County Cat, which issued its first paper on March 12, 1885. Kansas Governor John Martin named Colby the county seat the same year, and the city was incorporated in 1886. By that time, Colby was thriving, with two brickyards established along the creek that flowed into Colby from the south. Many business structures were built of Colby-produced brick. With the addition of lumberyards, houses were constructed using lumber.

Initially, town officers rented offices around town until the money was raised for a two-story 30′ x 30′ building. The new courthouse was occupied in July 1886. 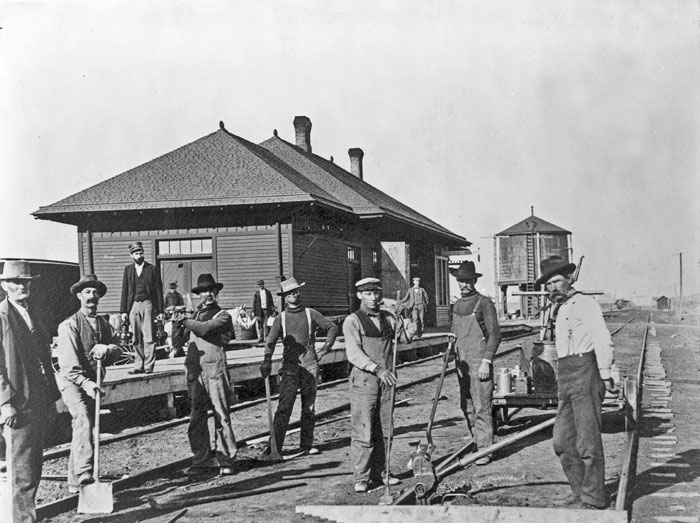 The Union Pacific Railroad reached the city in 1887, and the Rock Island Railroad followed the following year. By 1890, Colby was called home to 516 people. In the next years, the population fluctuated along with weather conditions such as rain and drought. Increased rainfall in the late 1890s improved agriculture, and in 1897, winter wheat was established as the most important crop in the county. With expanded technology, agricultural yields increased.

In the early 1900s, a telephone system was implemented, and by the end of the decade, the city light and power plant was operational. In 1907, a new courthouse was built in the Romanesque style with detailed limestone at $50,000. The clock was added in 1908 at the cost of $1200. The building is currently listed on the National Register of Historic Places. 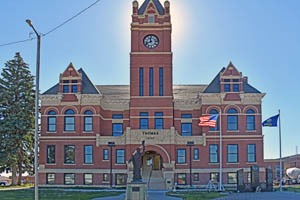 The Thomas County Courthouse in Colby, Kansas, was built in 1907 by Kathy Alexander.

In 1910, Colby was at the junction of the Chicago, Rock Island & Pacific Railroad, and two divisions of the Union Pacific railroads. It also boasted two banks, four grain elevators, a flour mill, a creamery, two weekly newspapers — the Tribune and Free Press, a money order post office with three rural routes, a hotel, several good stores, an opera house, cement sidewalks, a public park, graded schools, the county high school, and churches of five different denominations. Its population had grown to 1,130.

In 1911 drought returned to Northwest Kansas, and many people sold their land at low prices. Change was also brought by the automobile, when livery stables became gas stations, and new highways were built in the area. In 1920 brick streets were laid in downtown Colby at the cost of $160,000, and $50,000 was spent for a city sewer system.

The end of the decade brought the stock market crash, and the country went into the Great Depression. Compounding the problem, in the 1930s, a drought hit the Great Plains, farming was almost impossible, and the Dust Bowl hit the region. Many people left in these years, but by 1930, over 2,100 called Colby home. In the next decade, Colby was helped by President Franklin Roosevelt’s New Deal programs, which put people to work and helped build infrastructure and buildings. 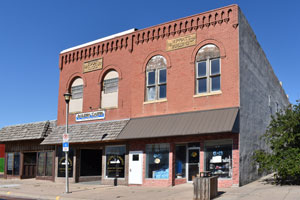 During these years, Fike Park gained a Greek-type theater and a 1,200-pound concrete lion, a clubhouse was built at the golf course, streets and roads were improved, the walls and furniture were refinished at the courthouse, and the Fairgrounds were improved. More Works Progress funds were used to build the Colby City Hall at the cost of a little over $23,000. The building is on the National Register of Historic Places today.

In the following years, more buildings were built, including the Colby Community High School in 1935, the St. Thomas Hospital, and the Municipal Swimming Pool in 1941.

Community growth continued with the construction of highways, the new National Guard Armory in 1960, and the establishment of Colby Community College in 1964. Colby’s population peaked in 1980 at 5,544. However, it has only slightly declined in recent decades and is now called home to about 5,370 people.

The Prairie Museum of Art and History serves as a cultural center. Thomas County Historical Society runs the museum. The museum occupies a 24-acre site north of Interstate 70 at 1905 S. Franklin Street. The Cooper Barn located at the museum complex is known as the “Largest Barn in Kansas.”

Colby remains the county seat and is the largest town in Thomas County. 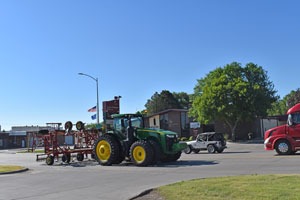 A tractor rolls down the business district of Colby, Kansas, by Kathy Alexander.