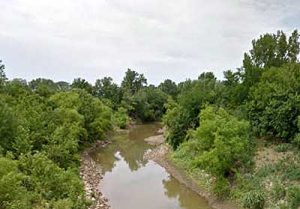 The Delaware River, also called the Grasshopper River, is one of the principal watercourses of northeastern Kansas and one of the major tributaries of the Kansas River.

Rising in Nemaha County about two miles west of the city of Sabetha, its course first runs through southeast through Nemaha County, across the southwest corner of Brown County and the northeast corner of Jackson County, until it enters Atchison County about three miles south of the northwest corner. From this point, its course is more southerly through Atchison and Jefferson Counties until it falls into the Kansas River nearly opposite the town of Lecompton.

Its principal tributaries are Cedar, Plum, Gregg’s, Walnut, Rock, White Horse, Big and Little Slough, Catamount Creek, and the Little Delaware River. Its original name of Grasshopper River, was so-called due to the visitation of grasshoppers in 1874. However, the name was unpopular and the legislature passed an act, which was approved by Governor Osborn on February 27, 1875, that changed its name to Delaware River. 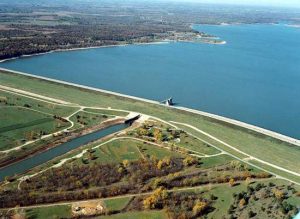 The river forms Perry Reservoir, which is a major regional lake for boating, swimming, camping, fishing, and other activities. The river also provide numerous opportunities for great fishing with some of the dominant fish including catfish, carp, longnose gar, drum, sauger, crappie, and white bass.