Perry Lake, located in Jefferson County, Kansas, is a US Army Corps of Engineers-operated reservoir in northeast Kansas. It is the third-largest lake in the state.

The dam was constructed on the Delaware River to help control flooding downstream in both the Delaware and Kansas Rivers. Completed in 1966, the lake is also a water reserve for nearby areas and a regional recreation lake. The lake covers approximately 11,000 acres, with over 160 miles of shoreline. The reservoir is impounded at its southern end by Perry Dam.

The Perry Lake reservoir inundated the original town of Ozawkie. The town was then rebuilt on higher ground to the west of the original Delaware River. 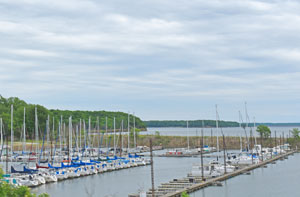 In 1968 the U.S. Army Corps of Engineers reached a long-term lease with the Kansas Parks and Resources Department, allowing for the development of Perry State Park.

Perry Lake was dedicated in 1970 and the Corps of Engineers operates Perry Lake’s recreational areas and wildlife preservation.

The closest town is its namesake, the community of Perry, located on the Delaware River a few miles south of the dam. Ozawkie lies on the western shore at the lake’s northern end.

Three marinas and multiple boat launch ramps are available around Perry Lake. The lake has been named one of America’s 100 best bass lakes. In addition to the white bass and largemouth bass, the lake also provides anglers with bluegill, channel catfish, crappie, sauger, and walleye. 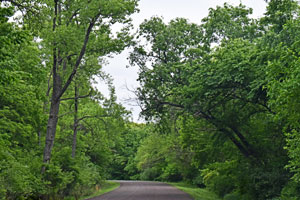 The state park is located between Topeka and Lawrence on the southwest shore of Perry Reservoir, four miles north of US-24 on K-237

Nearby is a nearly 11,000-acre wildlife area that includes about 1,000 acres of marshes, making it a great place to watch and hunt waterfowl.