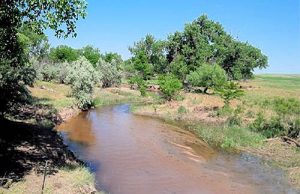 The Republican River flows 453 miles from Colorado along two forks into Kansas and Nebraska.

The river takes its name from a branch of Pawnee Indians known as “the Republicans,” who lived on its bank until about 1815.

As early as 1785, the Spanish and French had identified one of the villages of these Pawnee people and called them “aldea de la Republica,” meaning “little village of the Republic.”  Lewis and Clark mentioned the stream in 1804. Later, Lieutenant Zebulon Pike, leading the much smaller American expedition, convinced the Pawnee to accept the American Flag in place of the Spanish flag.

The Republican River rises on the high plains of eastern Colorado and forms two tributaries, called the North and South forks.

The northern fork flows east, entering Nebraska in Dundy County. The southern branch flows in a northeasterly direction from Kit Carson and Yuma Counties of Colorado, through Nebraska and enters Kansas in Cheyenne County, then flows northeasterly and leaves Kansas at a point south of the village of Benkelman, Nebraska. Near this point, it mingles its waters with the north branch and forms the Republican River joining at Benkelman, Nebraska.

From there, the river generally flows eastward along the southern border of Nebraska, flowing into the Harlan County Reservoir before curving southward into Jewell County, Kansas. It then flows in a southeasterly direction through the counties of Jewell, Cloud, Clay, and Geary until it unites with the Smoky Hill River about two miles below Junction City to form the Kansas River. Among the most important tributaries of the Republican are the Arickaree River and Whiteman’s Creek of Colorado, Redwillow Creek in Nebraska, and the Beaver, Sappa, and Prairie Dog Creeks of Kansas. The legislature of 1864 declared the stream unnavigable, although as an experiment, the Financier No. 2 in 1855 ascended for 40 miles without being grounded.

The river has been subject to much flooding through the years, including a significant flood on July 9, 1902, when it broke a dam near Concordia, Kansas, and re-routed the river by ¼ mile. In June 1935, a worse flood occurred, referred to as “Nebraska’s Deadliest Flood.” On May 31 and June 1, a large storm resulted in nine inches of rainfall, causing the Frenchman, Red Willow, Medicine, Deer, Muddy, and Turkey Creeks to reach their flood peaks simultaneously as the crest passed on the Republican River. According to reports of the time, the roar of the water could be heard coming down the Republican Valley five miles away. The water was said to have been 20 feet deep in some places, and the discharge was 280,000 cubic feet/second — more than 320 times the normal flow today. Before the water receded, 113 Estimates show 113 people at estimates of up to 40,000 head of cattle were killed. The flood resulted in 341 miles of highway and 307 bridges being destroyed, and almost 75,000 acres of farmland were covered in water. 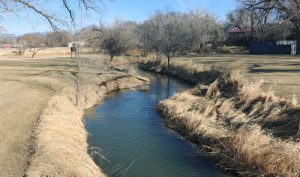