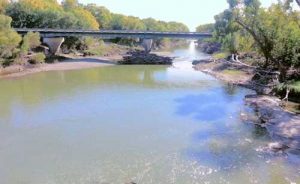 The Cottonwood River, one of the principal tributaries of the Neosho River, this waterway is formed by the union of two branches known as the north and south forks. The north fork rises near Marion County, Kansas‘ west line, and flows southeast, crossing the east line of Marion County about 12 miles north of the southeast corner and then northeast to Cottonwood Falls in Chase County. The south fork rises in the northwest corner of Greenwood County and flows northward until it joins the north fork a short distance below Cottonwood Falls. The mainstream then follows an easterly course until it falls into the Neosho River a few miles east of Emporia.

In 1806, Zebulon Pike led the Pike Expedition westward from St. Louis, Missouri. Part of their journey followed the Cottonwood River through Marion County near the current towns of Florence, Marion, and Durham.

North of Cottonwood Falls is the Cottonwood Falls bridge and dam. The first dam at this site was constructed of cottonwood logs in 1860, which provided water power for a saw and grist mill. In 1906 the dam was expanded and used to generate electricity. The present dam is constructed from cut limestone, which was later covered with concrete. 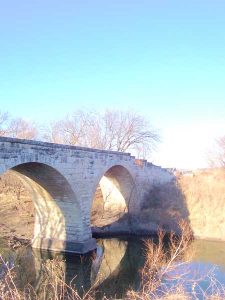 The first major bridge at Cottonwood Falls was a 150-foot long iron truss bridge constructed in 1872. The present bridge was constructed in 1914 by the Missouri Valley Bridge Company of Leavenworth, Kansas. It is one of only three remaining reinforced masonry, earth-filled arch bridges designed by Daniel B. Luten and is listed on the National Register of Historic Places today.