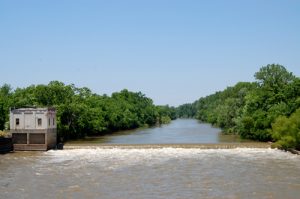 The Neosho River, a tributary of the Arkansas River in eastern Kansas and northeastern Oklahoma, is approximately 463 miles long.

The waterway is formed by two branches, one of which rises a few miles west of Parkerville in Morris County, while the other has its source in the southwest part of Wabaunsee County, at a point a little southeast of the village of Alta Vista. These branches unite in Morris County at a point a little northwest of Council Grove and flow in a southeast direction through the counties of Morris, Lyon, Coffey, Woodson, Allen, Neosho, Labette, and Cherokee before entering Oklahoma at a point about due south of Melrose. From here, it flows in a southerly direction and empties into the Arkansas River near the city of Muskogee, about a mile downstream of the confluence of the Arkansas River and the Verdigris River.

This stream was first known to the white man as the Grand River and to the Indians as the Six Bulls River. The origin and history of the name are unknown. Zebulon Pike mentions the waterway as the “Grand” in the description of his trip to the Pawnee village in 1806. Stephen H. Long, who visited this section in 1819-20, speaks of it as the Neosho or Grand River, which might indicate that the name Neosho was attached to the river between these two dates. Maps of 1825 and later spell the name Neozho. The survey of the Santa Fe Trail made in 1825-27 also gives the name Neozho, while later maps adhere to the spelling Neosho. On the lower river in and around Labette County, evidence of an early or ancient civilization has been found in the past including fragments of pottery and flint implements.

An early writer, in speaking of the tributaries of the Arkansas, said:

“There is not one that is at all navigable, except the Neosho from the north, which has been ascended by small boats for at least 100 miles.” 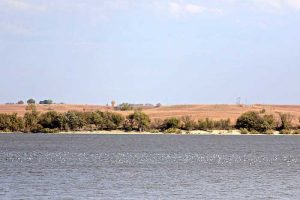 The Neosho River has been dammed at several points along its course, in most cases by the U.S. Army Corps of Engineers. In Kansas, a dam upstream of Council Grove forms Council Grove Lake, and a dam near New Strawn forms John Redmond Reservoir. In Oklahoma, a dam at Langley forms the Neosho’s largest reservoir, the Grand Lake o’ the Cherokees. A dam near Locust Grove forms Lake Hudson (also known as Markham Ferry Reservoir), and a dam upstream of Fort Gibson forms Fort Gibson Lake.