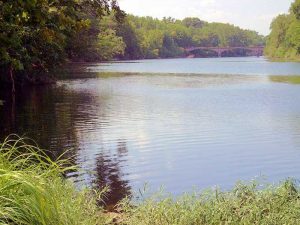 The Spring River is a 129-mile-long waterway located in southeastern Kansas, southwestern Missouri, and northeastern Oklahoma. The river begins in northern Barry County, Missouri, south of Aurora. It travels north of Verona and turns west across Lawrence and Jasper Counties, passing through Carthage, before snaking its way into Cherokee County, Kansas, where it widens considerably. It then flows past the east sides of Riverton and Baxter Springs before emptying into the Grand Lake o’ the Cherokees in Ottawa County, Oklahoma.

The river was important to Native American tribes and later to settlers in Lawrence and Jasper Counties of Missouri in the 19th century, especially around Carthage. Numerous grist and sawmills were established on the river as early as the 1840s. A dam erected northeast of Carthage in 1875 provided water power to mills and other industries. 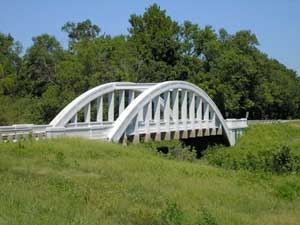 Rainbow Bridge over the Spring River at Baxter Springs, Kansas by Kathy Alexander.

The river takes its name from the many springs that provide its beginning, including Big Spring in Lawrence County, which discharges 12.3 million gallons of water per day. The river forms the western boundary of the Ozarks in southwest Missouri and southeast Kansas.