Bazaar, Kansas is an unincorporated ghost town located in the picturesque Flint Hills of Chase County.

One of the oldest towns in the county, the settlement got its start in March 1856 on Rock Creek on an old trail that ran south from Cottonwood Falls. This site was a half-mile west of the town’s present location. The first settlers were Jonah and Martha Leonard, Bernard McCabe, and the Lane family. In 1858 Patrick McCabe arrived, and in 1860 the John Sharpe family, the E.A. Alfords, the Earles, the Hibbs, the Turners, and the Metcalfs all settled at Bazaar. 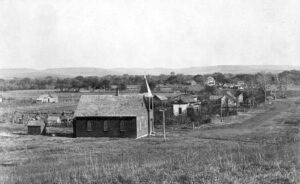 The first schools in Bazaar were subscription schools, held in log cabins rented for that purpose.

On November 11, 1858, Martha “Mary” Leonard, one of the town’s first settlers died. She was the first known white death in Chase County.

By the time that Chase County was organized in 1859, Bazaar had developed into a small town with about six homes and a few businesses including William Metcalf’s blacksmith shop, Dr. McKinley’s drug store, and Strehle’s general store.

A post office was established on April 16, 1860, and was named Bazaar for a shop or bazaar that Martha Leonard had owned in Pennsylvania. The first schoolhouse was built the same year. It was constructed of log slabs, the rough bark on the outside. Slabs with wooden pegs for legs were used also for benches. The one-room school was heated by a fireplace on one end. 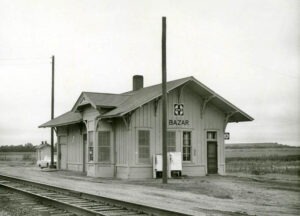 More than a decade later, work began on a second public schoolhouse. The large stone structure was completed in 1874. The building also served as a community center for the people for miles around for the next half-century.

On July 20, 1876, the post office and the town were renamed “Mary,” also in honor of Martha “Mary” Leonard. William Metcalf was the postmaster. Less than two years later, the name was changed back to Bazaar on March 19, 1878.

When the Atchison, Topeka & Santa Fe Railroad came through the area in 1887, the town was moved to its present site. Bazaar then became a shipping point that was widely used to ship cattle to market. New businesses sprouted up including Tom Sharp’s store, William Bigelow’s store, and Joseph Harrison’s grocery store. John McCabe operated a blacksmith shop and F.M. Gaddie kept a boarding house where meals were served to cattlemen and travelers.

In 1910, the town boasted two retail stores, a telephone exchange, a garage, a lumber yard, a money order post office, express and telegraph offices, and a population of 75.

In 1917, a third schoolhouse was built next to the old stone schoolhouse which had served so well for so many years. Built at a cost of about $4,000. It has two large school rooms, a library, two vestibules, two washrooms, and a kitchen. The school was dedicated on November 9, 1917. 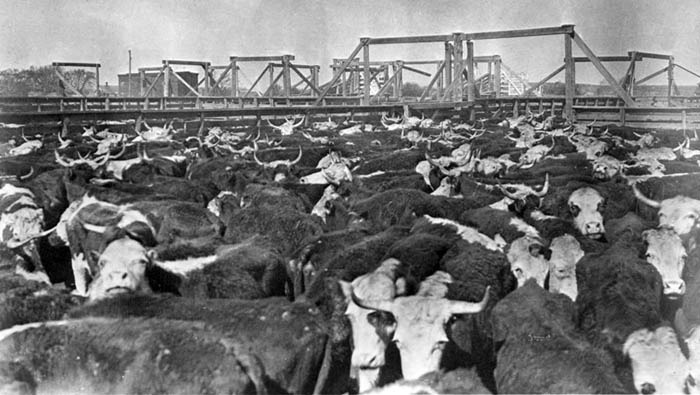 Bazaar peaked in about 1921, at which time it had 37 homes, three gas stations, a barbershop, a restaurant, a boarding house, an implement dealer, a garage, three saloons, and a population of 100. That year, it was the largest railroad cattle shipping point in the state, hauling annually about 1,800 to 2,000 cars of stock. In the following decades, the town declined as livestock began to be moved by large trucks instead of the railroad. 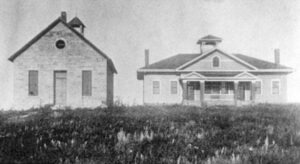 Bazaar made headlines on March 31, 1931, when famous Notre Dame football coach Knute Rockne died in a plane crash in the rugged Flint Hills country just a few miles away. Today the Knute Rockne memorial can be seen at a roadside rest area just a few miles from Bazaar on the Kansas Turnpike.

Disaster swept the town in 1951 when Rock Creek flooded the town with four feet of water. However, residents returned, cleaned up, and rebuilt.

In 1965, the Bazaar School was consolidated with Cottonwood Falls, and afterward served as a community center, a role it continues to play today.

Bazaar never incorporated. Today, there are no businesses left in the tiny community. Only a few homes and the Methodist Church, which continues to hold services, remain. The railroad continues to run by the community, and some cattle are still shipped on railroad cars. 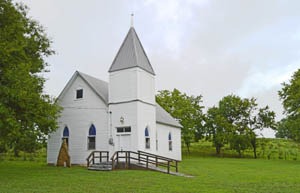 Bazaar is located about eight miles south of Cottonwood Falls.

The Bazaar School House and cemetery are located alongside the west side of Kansas Highway 177. The town of Bazaar is located about a half-mile east of the school on Sharps Creek Road.

Highway 177 in this area is the Flint Hills National Scenic Byway. Traveling north from Bazaar, visitors can see the Tallgrass Prairie National Preserve with its limestone mansion, Fox Creek Schoolhouse, and barn. In Cottonwood Falls, is the site of the Chase County Courthouse, in operation since 1873. Continuing north is the town of Council Grove with its many Santa Fe Trail Historic sites.

To the South is more beautiful landscape of the Flint Hills dotted with large ranches including Pioneer Bluffs, the site of the historic Rogler Ranch, the South Fork Ranch owned by Texas oil billionaire Ed Bass. Here can also be found Matfield Station, a 1922 bunkhouse structure that once provided shelter for section hands of the Atchison Topeka & Santa Fe railroad company. Today, the renovated bunkhouse provides lodging for area travelers. 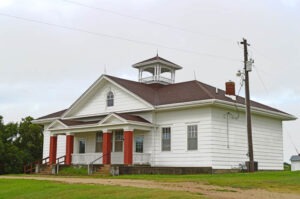