Cedar Point, Kansas, in western Chase County, was founded in 1862. Today it is a semi-ghost town with several remaining buildings and a historic flour mill.

The first settlers were Captain Orlo H. Drinkwater and his brother Delos F. Drinkwater, who arrived in 1857. 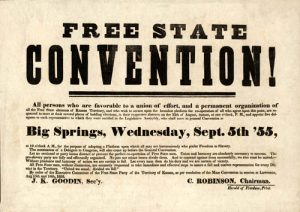 From Pennsylvania, Orlo Drinkwater and his brother came to Kansas in April 1855 and located near Topeka. An ardent Free-State man and a follower of old John Brown and Jim Lane, O.H. Drinkwater took an active part in the border war. He was present at the organization of the Free State party at the Big Springs Convention in 1855 and a member of the Free-State Legislature at its last session at Topeka in 1857.

When the Drinkwaters settled in the upper Cottonwood Valley, they built a log cabin along a small unnamed stream in the far western part of the county. Orlo Drinkwater suggested the creek be named Cedar Creek for the abundant cedar trees. It still bears that name today. Mr. Fratchet opened a grocery store in 1859.

The log cabin became known as Fort Drinkwater and was used as a gathering place for area settlers and as a refuge during Indian disturbances until 1868. A post office was established at his home, and Drinkwater was appointed postmaster on June 23, 1862. He named the post office Cedar Point. In 1863, school district No. 3 was formed here.

Several years later, Orlo Drinkwater laid out the townsite of Cedar Point a mile west of his farm and moved the post office there. He also built a stone house on a nearby hill. His home, Peter Schriver’s residence, and a wood-frame mill were the first structures on the townsite. Afterward, Fort Drinkwater was abandoned and collapsed after years of neglect. However, his farm continued to thrive, growing to 500 acres, with valuable improvements, including a good barn, cattle sheds, other farm buildings, and a fine orchard. 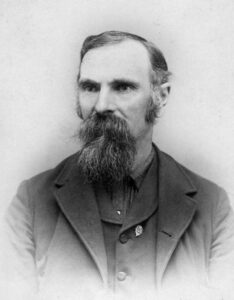 During the Civil War, O.H. Drinkwater was commissioned Captain in January 1863 and served in that capacity in Missouri, Arkansas, and Oklahoma until July 1863. While in charge of a large fatigue force engaged in constructing fortifications at Fort Gibson, Oklahoma, he received a sunstroke that nearly cost him his life and entirely incapacitated him from further service during the war.

In 1867, J.P. Crawford and Drinkwater began the construction of a wood-frame sawmill with a log dam across the Cottonwood River. In 1868, Crawford withdrew from the sawmill business, and L.C. Smith and Peter Schriver each bought an interest in the mill. That year Drinkwater was elected to the Kansas House of Representatives but served only one term in the legislature before returning to Chase County to continue his business ventures.

In 1870, Drinkwater and Schriver, also from Pennsylvania, were the mill owners. Schriver owned three mills in the Cottonwood Valley at one time: Cedar Point Mill, Cottonwood Falls Mill, and the Florence Mill. The pair soon began grinding the first flour at the wooden frame Cedar Point Mill to ship to the surrounding areas. They did a thriving business, and by 1871, the mill was a familiar place of business throughout southern Kansas. That year, the wood-frame mill was destroyed by a flood. Drinkwater and Schriver then built a new three-story mill out of native limestone. For it to mill grain, the stone burrs were replaced by steel rollers. The water wheel for the mill was shipped to Topeka, Kansas, the nearest railroad stop. From there, it was hauled by wagon to Cedar Point. The mill had a capacity of 75 barrels a day.

In 1871, the Atchison, Topeka & Santa Fe Railroad built a main line east-west and built a nearby station named Cedar Grove in the valley a half mile north of Cedar Point. 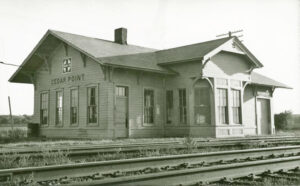 In 1876, a Methodist Episcopal Church was built in the community. In the early 1880s, the community also boasted two general stores and a blacksmith shop.

In 1878, James M. French arrived from Ohio and established a general store in Cedar Point which he continued to operate until the spring of 1883. In 1882 he engaged in the livestock business in connection with his mercantile business. His farm of 133 acres was partially under cultivation, with the remainder used for hay and grazing purposes. He had a herd of about 235 head, including two thoroughbred males of the short-horn breed, and most of his herd were of high-grade cattle. He also raised hogs and horses. On his land were a fine frame residence, a good barn, stone buildings, and a good fruit orchard.

In 1884, a stone dam replaced the log dam on the Cottonwood River.

For several years the Cedar Point Mill and Dam was a profitable business, at one point, operating day and night, making it one of the best mills in the state. Drinkwater sold his interest to M. Gulliford. In 1892, Gulliford sold his interest to Peter Schriver, making him the sole owner. Peter Schriver was Struck and killed by a train at a crossing west of Cedar Point in 1907. His son, Paul Schriver then took over the mill operations and added the wooden frame part of the grain storage bins to the original stone mill building. With that addition, the mill had a capacity of 100 barrels per day.

In 1910, Cedar Point was still served by the Atchison, Topeka & Santa Fe Railroad and was an important shipping point for grain and livestock for the rich agricultural district. At that time, it had a bank, a money order post office with one rural route, express and telegraph offices, telephone connections, some good mercantile stores, and a population of 200.

Orlo Drinkwater remained an active member of the Chase County community until he was struck by a bicycle while walking along the streets of Cedar Point on October 7, 1912. He was 77 years old.

Paul Schriver operated the mill until 1917.

In 1918, Cedar Point’s school burned down, and classes were temporarily moved to the principal’s home and the Presbyterian church. Within a few months, a new school began to be built. Years later, in 1937, a gymnasium was added to the building.

Cedar Point 1918 school still stands but is beginning to fall in on itself today. Photo courtesy Google Maps.

In the meantime, the mill sat idle for several years until 1923, when it was purchased by Arnold Brunner, who replaced some of the machinery and was Cedar Point’s last flour miller. The mill produced flour as before and became an important part of the business community, especially during the Great Depression. When he first bought the mill, the grinding capacity was about 250 bushels of wheat in 12 hours. However, the river began to fill with debris and mud in the following years, decreasing the power pressure, and during the 1930s, the Cottonwood River went dry. Alternate power was used during this time, and Mr. Brunner downsized the mill’s machinery and capacity to only 100 bushels of wheat in 12 hours. 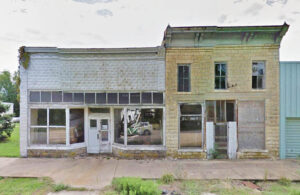 Ray Crofoot bought the mill for grinding feed for his cattle feed yard in 1941. Ray Crofoot closed his cattle operation in the late 1970s and sold the mill to A.L. Pinkston. In 1988, Dr. Bruce MeCullen purchased the mill, which has stood vacant since then. In the early 21st century, the mill was partially restored and was listed on the National Register of Historic Places in 2006. Today, it is owned by Drinkwater & Schriver Mill Inc., a Kansas non-profit corporation, to fund the upkeep and restoration of the mill.

In the 1960s and 1970s, Cedar Point’s elementary and high schools were consolidated with Cottonwood Falls. It came as no surprise as enrollment never exceeded 150 students. For some time afterward, the gymnasium was used as a community building for several years. However, in the mid-2010s, it was abandoned, and later the grounds were sold to a farmer. Though the old school still stands today, much of the building has collapsed in on itself.

As of the 2020 census, Cedar Point’s population was just 22. Though its streets are lined with empty buildings and broken sidewalks, it still has an active post office, a church, and several homes. It is located about five miles east of Florence and a half mile south of U.S. Route 50 Highway. 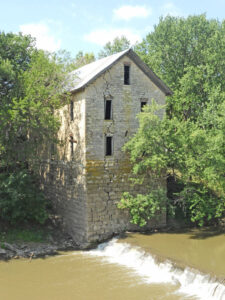