Saffordville, Kansas, in Toledo Township of Chase County, was first called Safford. It is extinct today.

The town began after the Atchison, Topeka & Santa Fe Railroad completed its tracks to the area in 1872. A small depot was built, and the first agent was Mr. Pents. The town was named Safford after Judge Safford, Supreme Judge of the District Court of Kansas, who had done a notable deed regarding the Homestead Act.

The town was on a 40-acre tract of land owned by Court Wright, Mr. Blasdale, and Ben Scott. Paris Mills and D.C. Allen, who operated a general merchant store in nearby Toledo, opened another store in Safford in the spring of 1882. A post office was established in the store on December 31, 1872, and Paris Mills became the first postmaster. Allen later bought Mills’ interest, enlarged the store, and built a hotel. The first blacksmith shop was built by Tom Johnson, and the first physician was Dr. Miller. Some of the first settlers were Joe Stone, Joshua Moffat, Dave Jones, Raffe Jones, Eaf Jones, Jew Murphey, Dee Miller, M. D. Lyles, and Mr. Winchild.

The first school house was built in 1876. Before a church was built, services were held in the schoolhouse.

There was a drought in the Fall of 1887, and no rain fell for months. The crops were killed, and large cracks were formed in the ground. Two or three houses burned in this drought period. The wells dried up, and not enough water could be secured to put out the fires. 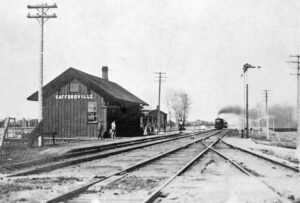 The second Atchison, Topeka & Santa Fe Railroad track was laid in 1897 that ran from Emporia to Newton.

On December 27, 1887, the town and post office name changed to Kenyon because the mail became mixed with the mail for Stafford, Kansas. However, less than a year later, the name was changed to Saffordville on October 3, 1888.

By 1896, the old school was not large enough for the students, and a new one was built. The old one was sold to the Easter brothers and was moved to their farm.

In 1899, the Woolwine brothers established another store.

The Cottonwood River in this area was prone to flooding, and in 1904 the river overflowed its banks, flooding the town with water flowing into almost every house. Two weeks later, it overflowed again.

In 1910, Saffordville was a shipping and receiving point for a large and prosperous agricultural district. At that time, regular mercantile lines were represented, plus a bank, telegraph and express offices, and a money order post office with one rural route. The population in 1910 was 200.

Saffordville was located on the Cottonwood River, ten miles east of Cottonwood Falls, two miles from the Lyon County line.

In 1923 and 1926, the Cottonwood River flooded again. In 1929, there were two floods – one in June and the other in November. From 1923 to 1929, the river overflowed eight times, causing severe losses to the farmers in the lowlands.

In the 1930s, the town had several fraternal lodges, including the Masons, Woodmen, Easter Star, and Royal Neighbors. It also had a Ladies Aid and other social organizations. At that time, it also had three stores, a blacksmith shop, a restaurant, a barber shop, a bank, a garage, a produce shop, a doctor, and a population of about 200. 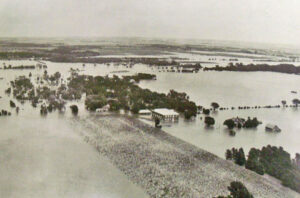 In 1951, the town maintained the same population of about 200, the schools, the Methodist Church, and a few businesses. But, once again, the community would struggle with flooding. One July 8 and 9, more than nine inches of rain fell, and the swollen Cottonwood River rose more than ten feet in two days.

Other area towns were also flooded, with Elmdale reporting water rising to the eaves of the one-story buildings on Main Street. But, Saffordville suffered the most. Residents reported water heights of up to 51 inches in their homes, and the town’s residents had to be evacuated. Once the waters receded, many moved their damaged homes to the higher ground of Cottonwood Falls, Emporia, or Toledo, two miles up the hill. Only two families stayed after the flood. By 1956, most of the houses and the church had been moved to Toledo, and The post office closed on January 1, 1957.

Very little is left today except for the active railroad tracks and an old grain elevator.