Tallgrass Prairie National Preserve established on November 12, 1996, preserves and protects a nationally significant example of the once vast tallgrass prairie ecosystem. Located in the Flint Hills, two miles north of Strong City, Kansas, this 10,894-acre portion of the once vast tallgrass prairie is preserved for this generation’s benefit, education, and enjoyment.

Tallgrass prairie once covered more than 170 million acres of the United States, from Indiana to Kansas and Canada to Texas. Nearly all of it has been plowed under for agriculture or urban development. Of the 400,000 square miles of tallgrass prairie that once covered the North American continent, less than 4% remains, primarily in the Flint Hills. 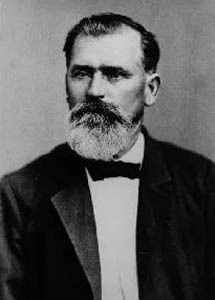 Since 2009, the preserve has been home to the Tallgrass Prairie bison herd.

Stephen F. Jones, a cattle rancher originally from Tennessee, began to develop the Spring Hill Ranch in 1878 by making significant land purchases. He and his wife Louisa moved to Strong City, Kansas, in August 1878. Stephen had previously engaged in a successful cattle operation in southeast Colorado with his two brothers, Jim and Peyton.

Stephen F. Jones named his ranch the Spring Hill Farm and Stock Ranch for the springs found on the hill west of the house. He was one of the early adopters in the region of enclosed ranching, in which cattle movements were limited by stone walls, fences, or barbed wire. He had the entire ranch enclosed with 30 miles of five-foot-high stone fence to accommodate his cattle operations. He completed the ranch headquarters in 1881 and continued to expand the ranch to 7,000 acres. Jones used the ranch to grow herds of purebred cattle of several breeds and some purebred breeds of hogs and sheep. 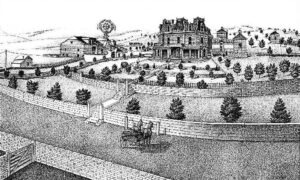 The main ranch house was built on a hillside in the Second Empire style, a rare architectural style in the region. David Rettiger of Strong City, Kansas, built the home. He was the co-owner of Emslie, Rettiger & Company, which was said to have the finest quarries in the state. He also built the massive three-story barn and stable, measuring 110 x 60 feet.

When complete, the ranch house was an imposing three-story, eleven-room building that cost $25,000. The barn and outbuildings cost another $15,000. According to local legend, it took “20 men working night and day to complete the home.” The home features cornices in ten of the eleven rooms, and the wooden doorway into the front of the home is hand-carved. The staircase and newel post are walnut, constructed off-site. The staircase pieces were installed on-site and are still as true today as they were first installed. The home and barn are listed on the National Register of Historic Places. 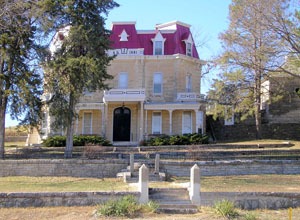 Located approximately half a mile north of the ranch is the Lower Fox Creek School, constructed of native limestone. It was built in 1882 on land donated by Stephen F. Jones. The first school term began on September 1, 1884, with Dora Peer as the teacher. The average enrollment was between one and 19 students of all grades. The school was closed in 1930, and the district was disbanded in 1946-47. At that time, the schoolhouse and its grounds reverted to the adjoining ranch. The school is listed on the National Register of Historic Places.

Jones sold the ranch to Barney Lantry in 1888. The Lantry family kept the ranch until 1904, primarily raising thoroughbred cattle. Afterward, the Spring Hill Ranch was divided up into smaller parcels. However, in 1935, George Davis, a grain dealer from Kansas City, began to reassemble the ranch. In 1955, the property was placed into a trust and operated as the Z-Bar Ranch after Davis’s death.

Historic interest in the property began in the 1960s when local groups organized the restoration of the Lower Fox Creek School. The ranch complex was listed on the National Register of Historic Places in 1971, one of the first listings in the state. The National Park Trust acquired it in 1994. However, local interests objected to the National Park Service owning it all, and a different model for a national park emerged. This resulted in a unique public/private partnership, managed by the National Park Service, but The Nature Conservancy privately owned the land. 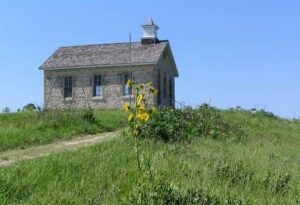 The rolling hills and rocky soils of the Flint Hills are home to over 500 plants species, nearly 150 birds, 39 reptiles and amphibians, and 31 mammals.

The Tall Grass Prairie Preserve is located on the Flint Hills Scenic Byway.