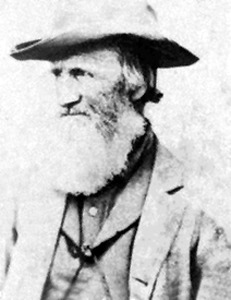 The great-grandson of Daniel Boone and a cousin to Kit Carson, Seth Hays was born on April 23, 1811, in Callaway County, Missouri. When he grew up, he was living in Westport (now Kansas City), Missouri. In April 1847, two Santa Fe Trail traders — Albert G. Boone and James G. Hamilton — established a trading post on the Kaw reservation, by virtue of their Kanza Indian trading license. They placed bachelor Seth M. Hays in charge to build the store and trade with the Kanza tribe. Hays became the first white settler of what would later become Council Grove, in Morris County, Kansas.

Hays built a log cabin on the north side of the old Santa Fe Trail near the west bank of the Neosho River close to where the Commercial House later stood. The cabin served as both a store and a dwelling, which housed Hays and his African-American slave named Sarah Taylor, who was familiarly called “Aunt Sally”. 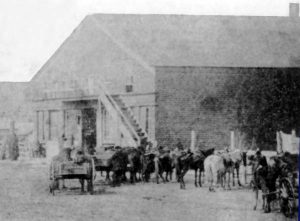 Within five years Seth Hays bought out Boone and Hamilton and traded under his own name. In 1857, he put up a larger building to accommodate the Santa Fe Trail traffic. He also took on a business partner by the name of G. M. Simcock, and the business was named the S.M. Hays & Co. The establishment served citizens as a trading post, restaurant, hotel, courthouse, post office, printing office, meeting and social hall, and, at one time, a bawdy form of dinner theater.

In 1859, with hundreds of travelers coming through Council Grove on their way to find gold in the Rocky Mountains, business was booming. By 1860, times were so prosperous that the newly formed Council Grove Town Company began selling lots and soon there were many homes under construction in the town. That same year, in a four day period, the KanzaIndians spent $15,000 here and across the street at the Conn Store.

On January 29, 1861, Kansas entered the Union as a free state. At that time, Seth’s slave “Aunt Sally” was freed but chose to remain in the Hays household.

That same year, another event would occur that would change Hays’ life. On November 16, 1861, Kittie Parker Robbins was born in the mail station to her mail-carrier father James, and his wife, Caroline. Unfortunately, complications during childbirth resulted in the death of Kittie’s mother, and the baby was brought to the Hays home to be cared for by “Aunt Sally.” Two older sisters were placed in foster homes and the family was never reunited.

In 1862, Hays sold his business interest in the store to his partner, G.M. Simcock, but, retained ownership of the building. He then moved to a ranch in Colorado where he lived for about three years. In the meantime, the Santa Fe trade became increasingly lucrative. In 1863, Hays’ former partner, G.M. Simcock, estimated that $40 million in freight was hauled in ox-and mule-drawn wagons through the town. 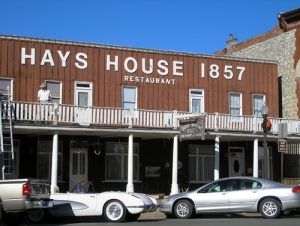 The Hays House in Council Grove is the oldest operating restaurant west of the Mississippi River, Kathy Weiser-Alexander.

Hays returned to Council Grove in 1865 and on January 1, 1866, Simcock moved his business across the street to the building that is known today as the Trowbridge building and Hays resumed trading in the original store building. In addition to supplies, the Hays House offered meals and rooms to weary traders on their eight-week trip between New Mexico and Missouri. Patrons included Jesse James and General George Armstrong Custer. The building continues to stand today as the Hays House Restaurant. It the oldest continuously operating restaurant west of the Mississippi River.

As Seth’s businesses continued to be lucrative, he built a new home in 1867. Constructed of bricks from a local factory and native lumber, it Council Grove at that time. That same year, Seth was allowed to adopt his five-year-old foster child, Kittie. At 50 years of age, the bachelor became a father on the same day he recorded the deed to his new home. At his new home, he continued to live with his adopted daughter and freed slave, “Aunt Sally,” who had her own quarters in the basement. Today, the Seth Hays Home still stands and is operated as a museum by the Morris County Historical Society. 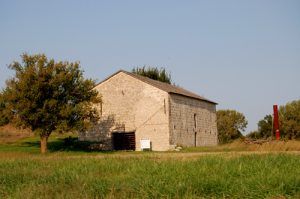 This limestone barn was built by Seth Hays for his livestock. It was later used as a “Poor House.” Today, it is listed on the National Register of Historic Places. by Kathy Weiser-Alexander.

A few years later, in 1871, Hays built an imposing 76-foot-long native stone barn to house his livestock. This building would later serve as part of the Morris County Poor Farm, which existed from 1889-1945. It, too, continues to stand. Listed on the National Register of Historic Places, the historic Hays Barn was in danger of collapse until repairs were made in the 1990s.

At about the same time, “Aunt Sally,” began to suffer health problems. At that time, Hays sent young Kittie to live with friends in  Missouri. When Sarah Taylor died in 1872 Hays insisted that she be buried in his lot in the Greenwood Cemetery. Seth Hays died a year later on February 3, 1873, and was buried near “Aunt Sally” in the Greenwood Cemetery.

Kittie, who was only 11 years old at the time, became his sole heir. She went on to complete boarding school in Westport, Missouri, married and settled in Las Vegas, New Mexico.

Hays witnessed many changes in Council Grove over his 25 years as a community leader: the Kanza/Kaw Indians were relocated to their reservation in this area; the settlement he started grew into a town, and Kansas evolved into a territory, and then achieved statehood. 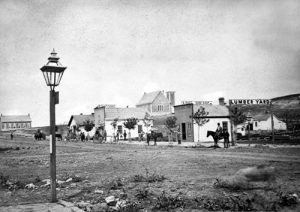