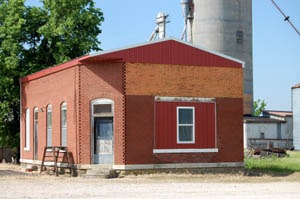 An old bank building in Lamont, Kansas by Kathy Weiser-Alexander.

Lamont, Kansas is an unincorporated community in northeastern Greenwood County. Also called La Monts Mill in its early days, the settlement gained a post office on February 14, 1888. Located along the Missouri Pacific Railroad, the town was laid out in the next year but it grew slowly.

In 1910, the community had become a receiving and distributing point for the adjoining area, had express and telegraph offices, a money order post office, and a population of 100 people.

Through the years, Lamont remained a small agricultural town. Today, it supports just a handful of people and several abandoned business buildings. However, its post office remains open. The Greenwood County Historical Society and Museum has horse-drawn farming equipment on display in the town. 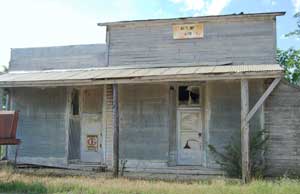 Lamont is located about 30 miles northeast of Eureka, Kansas.