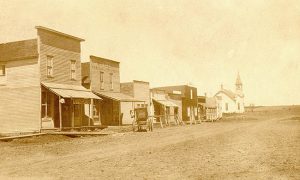 Quincy, Kansas in its early days.

Quincy, Kansas, a ghost town today, is located on the Verdigris River in Greenwood County, is about 20 miles northeast of Eureka. The town was named after an early resident and gained a post office on March 17, 1869.

Situated on the Atchison, Topeka & Santa Fe Railroad, the small agricultural town grew slowly and by 1880, it supported about only about 50 people.

However, by 1910, it boasted numerous mercantile enterprises, banking facilities, express and telegraph offices, a money order post office with one rural route, and about 250 people. It also had several churches and its public schools were said to have been excellent. 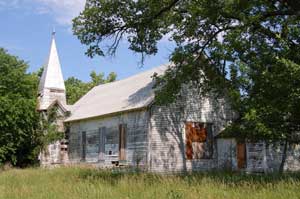 Quincy remained a small town and with the oil boom in the 1920s prospered with the rest of Greenwood County. It was during this time that the community experienced one of its most exciting events. On Thursday, January 11, 1923, three Oklahoma bandits held up the Virgil Bank at Virgil, Kansas, about eight miles to the north of Quincy. Making off about $3,000, they hightailed it south back to Oklahoma. However, luck was not with them, and just six miles south of Virgil, their car broke down. Wasting no time, they hijacked another vehicle from two local men named Banty Johnson and Pike Ditty. With the two men still in the vehicle, the bandits raced south towards Quincy. However, citizens had been alerted to the bank robbery and unaware the bandits had taken hostages, blasted at the passing vehicle as it zoomed through town, wounding the unfortunate Pike. The locals were later let go and the bandits escaped to Oklahoma. Pike Ditty survived his injury. 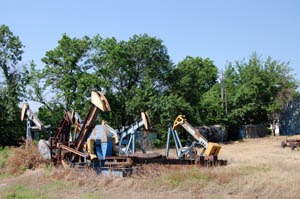 The remains of Greenwood County’s oil boom still remain in various parts of the county by Kathy Weiser-Alexander.

By the 1930s the oil boom in Greenwood County was over and that coupled with the Great Depression wreaked havoc among Greenwood County and small-town Quincy. The population began to fall. It never recovered. Quincy lost its post office in June 1975 at which time its population was just 50 people. It didn’t help the small community, that there was no major highway running through it.

Though there are few people that continue to live in the area, the community of Quincy is a ghost town today, with just a few abandoned and falling buildings. 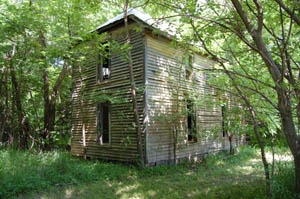 This old commercial building in Quincy, Kansas will not last long, by Kathy Weiser-Alexander. 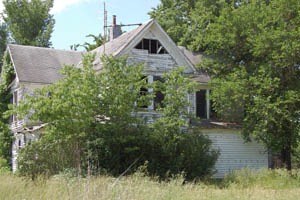 This large home in Quincy, Kansas will soon be taken over by the elements by Kathy Weiser-Alexander.