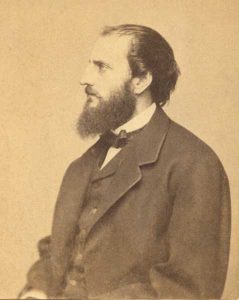 Daniel Read Anthony was a Kansas journalist, politician, and soldier.

Anthony was born in South Adams, Massachusetts, on August. 22, 1824, the son of Daniel and Lucy Anthony, and a brother to Susan B. Anthony, the famous advocate of female suffrage. He attended school at Battenville, New York, and later spent six months at the Union Village Academy in his boyhood. Upon leaving school, he became a clerk in his father’s cotton and flour mill until he was about 23 years old when he went to Rochester, New York. After teaching school for two seasons, he engaged in the insurance business, and in 1854 he was a member of the first colony sent out to Kansas by the New England Emigrant Aid Society.

In June 1857, he moved to Leavenworth, where he would remain for the rest of his life. A fervent abolitionist, Anthony was early involved in the Underground Railroad in Leavenworth. Working with a free black man named William Dominick Matthews, who had established a boarding house in 1856, Anthony and his friends helped Matthews harbor escaped slaves. Matthews would go on to become one of the few African American captains in the Civil War.

When the Seventh Kansas Cavalry was organized in 1861, Anthony was commissioned as a lieutenant colonel and served until he resigned on September 3, 1862, due to a controversy between him and General Robert B. Mitchell. While in camp at Etheridge, Tennessee, in June 1862, Lieutenant-Colonel Anthony was temporarily in command of the brigade, during a short absence of General Mitchell, and issued an order prohibiting slave owners from coming inside the Union lines to recover fugitive slaves. The order further specified that “Any officer or soldier of this command who shall arrest and deliver to his master a fugitive slave shall be summarily and severely punished according to the laws relative to such crimes.” When General Mitchell returned and assumed command of the brigade, he asked Lieutenant-Colonel Anthony to countermand the order. Anthony replied that he had no right to issue or revoke orders as he was no longer in command. Mitchell then placed him in command long enough to rescind the obnoxious order. However, when Anthony was in command again, he denied the right of General Mitchell to dictate what he should do and again refused to countermand the order. He was arrested and relieved of the command, but the matter came before the United States Senate, and Anthony was reinstated by General Henry Halleck but then resigned.

Anthony was elected mayor of Leavenworth in 1863 and undertook to clear the city of Southern sympathizers. Several houses sheltering them were burned when General Thomas Ewing placed the city under martial law. When Ewing’s scouts seized some horses, Anthony interfered and was arrested but was released the next day, and civil law was restored.

Anthony married Miss Annie F. Osborn of Edgarton, Massachusetts, on January 21, 1864. In the spring of 1866, Anthony was removed from the office of postmaster in Leavenworth because he refused to support the Reconstruction policy of Andrew Johnson.

He was president of the Republican State Convention of 1868, and the same year was one of the  Kansas presidential electors. In 1872 he was again elected mayor of Leavenworth; he was appointed postmaster of Leavenworth by President Ulysses S. Grant on April 3, 1874, and reappointed by President Hayes on March 22, 1878. He served several terms in the city council and was nominated for mayor several times but was defeated. Anthony was a life member of the Kansas State Historical Society, of which he was president in 1885-86. 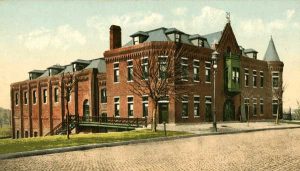 Meanwhile, In January 1861, he established the Leavenworth Conservative, but the following year sold it to A. C. and D. W. Wilder. In March 1864, he purchased the Bulletin and the Times came into his possession in 1871, and this newspaper, he continued until his death. As a journalist, Anthony was aggressive, and his outspoken editorials frequently involved him in trouble. To him, physical fear was a stranger, and when R. C. Satterlee of the Leavenworth Herald published something derogatory about Anthony in 1861, a shooting affair occurred, which resulted in the death of Satterlee.

On May 10, 1875, W. W. Embry, a former employee, fired three shots at Anthony on the stairway of the opera house. One of the shots hit him in the right breast, just below the collar bone, severed an artery, and Anthony’s recovery from this wound was regarded as one of the remarkable cases of modern surgery.

He died at Leavenworth on November  12, 1904. A short time before his death, he suggested the following as his epitaph:

“He helped to make Kansas a Free-State. He fought to save the Union. He published the Daily Times for nearly 40 years in the interest of Leavenworth. He was no hypocrite.”

Compiled and edited by Kathy Weiser/Legends of Kansas, updated June 2021.