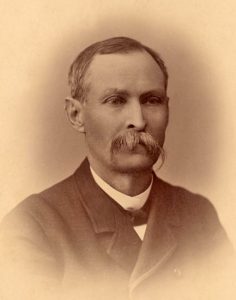 Daniel Webster Wilder was a journalist and author in Kansas.

Wilder was born in Blackstone, Massachusetts on July 15, 1832. He entered the public Latin school of Boston in 1848, graduating in 1852. He received a Bachelor’s degree in 1856 from Harvard, then studied law in that institution and at Rochester, New York.

He came to Kansas in 1857 and settled at Elwood the next year where he edited the Free Press and practiced law. He was one of the founders of the Republican Party in Kansas in 1859. He became the editor and one of the publishers of the Free Democrat at St. Joseph, Missouri in August 1860, and in the December following, Wilder and the whole office force were indicted for violating the laws of a slave state and advocating emancipation. He then returned to Kansas and became editor of the Leavenworth Conservative, an anti-slavery newspaper.

In 1863 he was appointed Surveyor-General of Kansas and Nebraska by President Abraham Lincoln. In 1864 he married Mary E. Irwin in Atchison County and the following year he became the editor of the Evening Express at Rochester, New York. He was back in Leavenworth in 1868 and was editor of the Leavenworth Times and Conservative. He was elected president of the Missouri Valley Associated Press in September of that year; was re-elected in 1870, during which year he became editor of the Fort Scott Monitor.

Wilder was one of the incorporators of the Kansas Magazine in 1871, to which he was a frequent contributor; was one of the founders of the Kansas Historical Society in 1875, of which he was later the president and for many years one of the directors. His political career covered one term as State Auditor, one term as Executive Clerk under Governor John Martin, and two terms as Superintendent of Insurance, from 1887 to 1891. On his retirement from office, he went to Kansas City and published the Insurance Magazine. He then went to Hiawatha in 1892 and established the Hiawatha World. Wilder also published two books — Annals of Kansas and Life of Shakespeare and was one of the compilers of all editions of Bartlett’s Familiar Quotations. He continued to live at Hiawatha until his death on July 15, 1911.