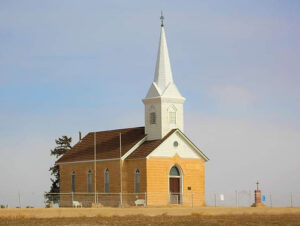 Denmark, Kansas is an extinct town along the banks of Spillman Creek in Grant Township of Lincoln County.

One of the first permanent settlements in Lincoln County, it was settled about 1869 by Danish Lutherans. Many of the first settlers lost their lives in an Indian raid in May of that year.

Soon, a townsite was platted, and building began. A post office was established on May 2, 1872. By 1875, the community also had a store, a blacksmith shop, and a school.

Residents laid the cornerstone for a stone church in 1876. Built of post-rock limestone, it was located on the homestead of Lars P. Nielsen, who donated the ground. Stone quarrying was done in the community from the Niels Andersen farm, the sand from the farm owned by Clarence Lessor. The lumber came from Ellsworth, a distance of 35 miles. The beautiful church was completed in 1880.

A bell tower and entry were added in 1901. At that time, a large cross, carved of native limestone, that stood on the roof over the doorway was removed. It now stands east of the church as a memorial to the early pioneers who built the church. 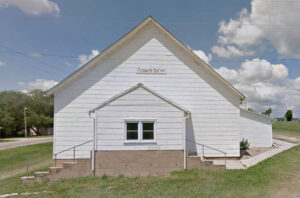 But Denmark was not growing, and its post office closed on February 29, 1904. It then received its mail by rural delivery from Vesper, the nearest railroad station.

A community hall was built nearby in 1911 and continues to be utilized for community activities today.

In 1916, the Salina and Northwestern line of the Atchison, Topeka & Santa Fe Railroad. was being built to the west of Denmark, and people and businesses moved to the west. The town was then known as Upper Denmark, while the newly established town was called Lower Denmark. The town then began to grow, and by the end of the year, the population was about 200 families. The post office was reopened on March 30, 1917.

By the 1920s, the town had two schools, a church, a mercantile store, a community hall, the post office, a hotel, a bank, and several other businesses. Unfortunately, it would not last long, as the Great Depression and drought caused the town to decline in the following years. 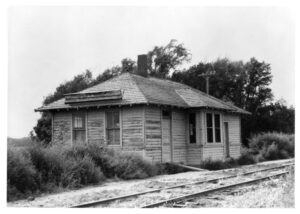 For more than a century, Denmark Lutherans have clung to their faith, and the sturdy church built atop the rise in Denmark continues to hold services today.

The town still has the community hall, an active railroad, a grain elevator, and a row of abandoned stone business buildings on Main Street. Currently, work is being done to preserve this row of business buildings that once held a mercantile store, a grocery, a garage, and a pool hall.

Denmark is about ten miles northwest of Lincoln, three miles north of K-18.

This row of buildings in Denmark, Kansas is in the process of restoration today. Photo courtesy Google Maps.