Easton, Kansas, an important early settlement of Leavenworth County, was founded in the Fall of 1854.

The first white settler in the area was Andrew J. Dawson, who established a ranch and opened a store in 1852. He was located near what was known as Dawson’s Ford, the crossing of the Big Stranger River on the Fort Riley road. 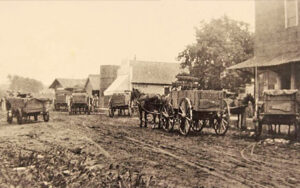 In the early autumn of 1854, Andrew Dawson, Colonel William G. Mathias, General L. J. Eastin, and others laid out the village of “Eastin,” named for General L. J. Eastin, the editor of the Leavenworth Weekly Herald newspaper. Later, at the insistence of Governor Andrew Horatio Reeder, the name was changed to Easton for Reeder’s birthplace of Easton, Pennsylvania.

In 1855, Stephen Minard bought out Andrew Dawson’s store and opened a hotel. On December 21, 1855, a post office was established with Andrew Dawson as postmaster. 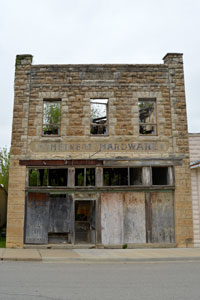 An old building in Easton, Kansas, by Kathy Alexander.

Like other border counties in Kansas, Leavenworth County had its share of violence as Free-State settlers, and pro-slavery men fought during the Bleeding Kansas era. In a political dispute, on January 17, 1856, pro-slavery advocate Thomas Cook was shot and killed by Free-State support Reese P. Brown. Later that day, Brown was killed by ax-wielding Robert Gibson in Leavenworth, 11 miles to the southeast.

In 1865, when the Butterfield Overland Despatch stagecoach left Atchison, Kansas, making its way to Denver, Colorado on the 592 miles long Smoky Hill Trail, Easton was a stagecoach stop. It remained a stagecoach stop until the Kansas Pacific Railroad was also pushing towards Denver, and by 1870, the stage line was no longer needed.

By the early 1880s, Easton had a population of nearly 100, a school, three church societies — Methodist Episcopal, Baptist, and Catholic, a Masonic Lodge, two general stores, a blacksmith shop, and a grocery store.

In 1910, Easton, located on the Union Pacific Railroad, had become a shipping point for a rich agricultural community. At that time, it had It was several general stores, a hardware and implement house, a lumber yard, a money order post office, express and telegraph facilities, a hotel, a good graded school, and its population was 310

Easton gradually grew in the following decades until its population peaked in 1980 at 460. 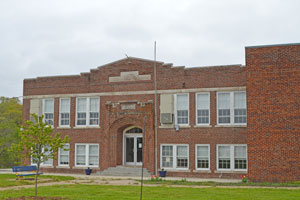 An old school in Easton, Kansas by Kathy Alexander.

Today, it is called home to about 250 people.

Easton is located in the northwestern part of the county, 11 miles northwest of Leavenworth.