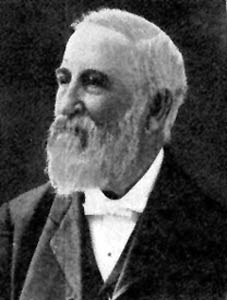 Edmund Needham Morrill was a soldier, businessman, and the thirteenth governor of the State of Kansas.

Born at Westbrook, Maine on February 12, 1834, Morrill was educated in the public schools and at Westbrook Academy, and after leaving school learned the trade of a tanner with his father.

In March 1857, he landed in Kansas and located in Brown County, where he and a partner established a sawmill. The same year he was elected to represent Brown and Nemaha Counties in the first Free-State legislature, serving in the extra session of December 1857, and the regular session which began in January 1858.

In 1861, when the Civil War broke out, he enlisted as a private in Company C, Seventh Kansas Cavalry, but in a short time was promoted to the rank of sergeant. In August 1862, he was commissioned captain and ordered to report to General Ulysses S. Grant at Corinth, Mississippi, where he was made Commissary of Subsistence and placed in charge of government stores in Tennessee. Near the close of the war, he was brevetted major and was honorably discharged in October 1865.

Returning to Brown County, he engaged in the banking business, in which he continued for the remainder of his life, and at the time of his death it was said that during his long career as a banker he never foreclosed a mortgage. In 1866, he was elected Clerk of the District Court. The following year he was elected County Clerk and held that office by re-elections until 1872 when he was elected to the Kansas State Senate. He was re-elected to the senate in 1876, and during his second term, served as president pro tem. In 1882 he was elected Congressman-at-large, and at each of the three succeeding biennial elections was chosen to represent the First District in the lower house of the National Legislature.

In 1890 he declined a fourth term as Congressman and announced his intention of retiring from politics. However, in 1894, he yielded to the solicitations of his friends and accepted the Republican nomination for governor. He won the election in November.  He was defeated for a second term in 1896. 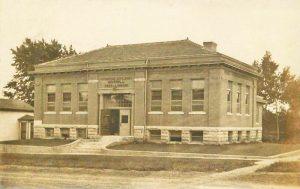 Governor Morrill was a man of great public spirit and was always a willing helper of any enterprise for the material advancement of the state. He was a liberal contributor to the drought sufferers, gave the City of Hiawatha its fine library and academy, and no church ever appealed to him in vain for assistance. On July 7, 1886, he became a member of the Kansas Commandery of the Military Order of the Loyal Legion, in which he held the offices of vice-commander and chaplain. He was twice married. His first wife died without children, but the second marriage was blessed with two sons and two daughters.