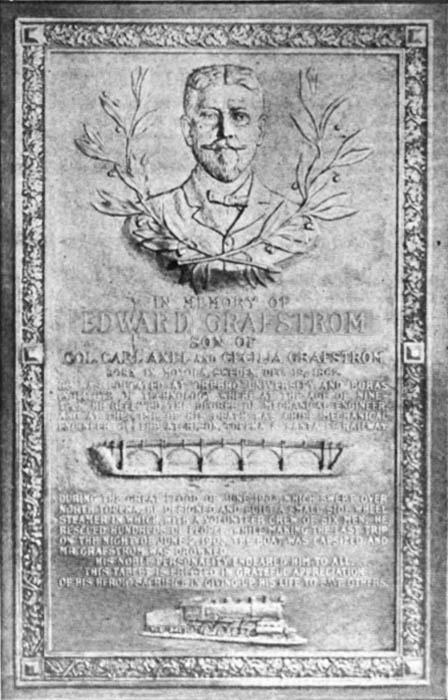 Edward Grafstrom was a mechanical engineer and Kansas hero.

Grafstrom was born in Motola, Sweden on December 19, 1862. He was the son of Colonel Carl Grafstrom, a distinguished officer of the Swedish Army. Edward served for a while in the Swedish Navy. He was well educated and attended Orebro University and the Boras Institute of Technology, graduating in mechanical engineering at the age of 19.

Soon afterward he came to America, where he found employment with the Atchison, Topeka & Santa Fe Railroad. Living in Topeka, Kansas, he was married. He was described as powerful in physique, self-poised in all emergencies, a skillful athlete, and an expert swimmer.

Grafstrom met his fate in a manner that was both sad and tragic. At the time of the great flood in the spring of 1903, he designed and hastily constructed a small steamer, with which he engaged in rescuing the inhabitants of the flooded districts of Topeka. Hundreds of people were conveyed to places of safety through his energy and foresight. However, on the night of June 2, 1903, while trying to rescue still more, his boat capsized, and while the other five members of the crew succeeded in saving themselves, Grafstrom was swept away by the raging waters. His body was never recovered. At the time of his death, he was the Chief Mechanical Engineer of the railroad.

On June 6, 1906, a committee of railroad men presented to the Kansas Historical Society a fine bronze tablet bearing an inscription recounting his deed of valor and his heroic sacrifice.