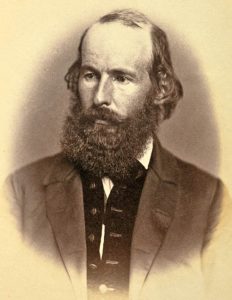 Eli Thayer was an educator, inventor, Congressman, and one of the organizers of the Massachusetts Emigrant Aid Company.

Thayer was born in Mendon, Massachusetts, on June 11, 1819. He was educated at Bellingham and Amherst Academies and at Brown University, where he graduated in 1845. He then began teaching in Worcester Academy, became its principal, and in 1848 founded the Oread Institute, a woman’s college at Worcester. In 1853, he was elected to the Massachusetts Legislature, where he organized the Bank of Mutual Redemption and the Union Emigrant Society. In 1856 he was elected to Congress and was re-elected, serving as a member of the Committee on Militia and chairman of the committee on Public Lands.

He was active in promoting emigration from New England to Kansas to be admitted to the Union as a Free-State. In the spring of 1854, he was instrumental in organizing the Massachusetts Emigrant Aid Company, with a capital of $5,000,000. Subsequently, this company was merged with the Emigrant Aid Company of New York and Connecticut under the name of the New England Emigrant Aid Company. Charles Sumner said that he would “rather have the credit due Eli Thayer for his work in Kansas than be the hero of the Battle of New Orleans.”

During the early part of the Civil War, Thayer was United States Treasury Agent and later was connected with the Hannibal & St. Joseph Railroad Company. After the war, he devoted most of his time to inventions, which covered a wide field. He was a man of strong character and convictions and a scholar of marked ability. He was also the author of a volume of Congressional speeches and the Kansas Crusade. He died in Worcester, Massachusetts, on April 15, 1899.