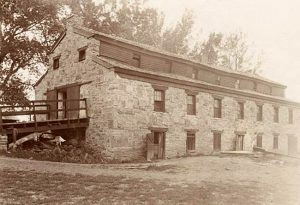 Elizabeth Simerwell Carter was a pioneer mission teacher in Kansas.

Elizabeth Frances Simerwell was born at the Shawnee Baptist Mission in Johnson County, Kansas, on January 24, 1835, to  Reverend Robert and Fanny Goodrich Simerwell. Her father had come to Kansas in 1833, traveling with a band of Potawatomi Indians who were being relocated into Kanza Indian territory. After serving at two Indian missions in what is now Johnson County, he and his wife, Fannie, helped run the Pottawattomi Indian Mission five miles west of Topeka from 1848 until they retired from missionary work in 1854 and settled in the area. The mission building still stands on land at the Kansas Historical Society History Museum.

Elizabeth was educated at Upper Alton, Illinois, and then became a teacher in the Baptist Kansas Mission. She was the first teacher at Ottawa, Kansas. She married John S. Carter, and the couple would have four children. 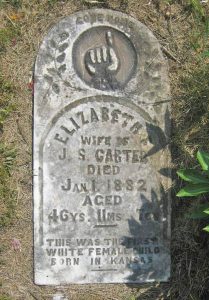 Throughout her life, she was an enthusiastic worker for the advancement of the Baptist Church in Kansas.

She died at Auburn, Kansas, on January 3, 1883, and was buried at the Simerwell Cemetery.