Situated in the northwestern part of Montgomery County, Kansas, at the confluence of Duck Creek with the Elk River, Elk City began as a trading post established by John Kappell in early 1868 when the area was still part of the Diminished Reserve of the Osage Indians. Building a small cabin that doubled as the trading post Kappell bartered his wares with the Indians for their furs, and also supplied area settlers with a few of the necessities at high prices. 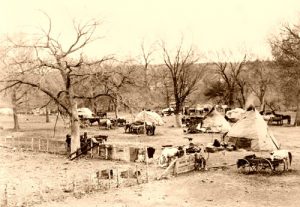 Located on the rich bottomland of the Elk River in a valley surrounded by stone and oak-covered hills, several people thought the location was perfect for a townsite, and in December 1868 a town company was organized. Elk City became the first town established in Montgomery County.

The next business started in the town was that by A. E. Baird in a log building, which consisted of general merchandise and the next year saw S. B. Davis, T. J. Brown and Samuel Maples build the first sawmill. At that time school was taught by William Osborne in a log house belonging to a man named Chandler. A post office was established at Elk City in November 1869 in Osa Sherman’s store. A couple of years later, M.D. Wright, who owned the stationery and notion store, became the postmaster and his store — the post office.

More businesses came in 1870 when M.D. Wright began to sell stationery, notions, etc., in a little log building, A. R. Quigg engaged in the hardware trade, and a blacksmith shop was built by J. P. Morgan. At some point, Kappel’s old trading post, after having undergone overhauling, with a new front, etc., became the Watts & Masterman’s furniture store.

With more and more people coming to the area, the settlement’s population increased enough that it officially became a city of the third class in the spring of 1871. That same year plans were in the works to build a school for the children in the community. In the meantime, they attended school in a building erected by Thomas Harris for a hotel, until the school was completed in January 1872. The one-room building was a one-story frame structure measuring 26×40 feet. 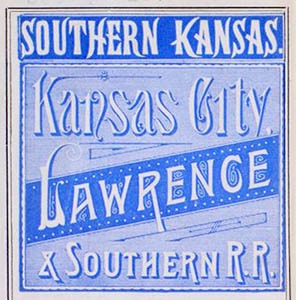 Although Elk City afterward proved a successful attempt as an enterprise of town-building, her beginning was made in the midst of spirited rivalry. Bloomfield, about a mile northeast, and Tipton a little way east of the town, were established and sought to win in the race for supremacy. But Elk City took the lead, outstripping these two places, which ceased to exist.

In 1879 the Kansas City, Lawrence & Southern Railway was constructed to Elk City which was advantageous in stimulating its improvement and growth.

The Presbyterian Church was organized in 1880 and a church was built the same year. The one-story stone structure not only served the Presbyterians but several other church congregations as well.

By the early 1880s, the town boasted a population of about 500, a school, and several large brick business buildings, including a hotel. By this time, the school was becoming too crowded and a new two-story brick building was erected in the fall of 1882, at which time the city’s pupils numbered 218.

In 1882  the Missionary Baptist Church purchased the old school building and remodeled it fitting for a place of worship.

The first bank, the Elk City banking house, was established in March 1881. By 1883, the town supported several manufacturing facilities including the sawmill, the Elk City flouring mill, owned by Wright & Musson, and a brickyard owned by Price & Woodring. Other smaller factories including wagon shops, and a manufactory for the making of the Double Spiral Bed Springs. 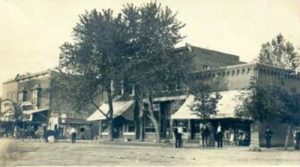 By the turn of the century two railroads were running through the city — the Missouri Pacific Railroad and the Atchison, Topeka & Santa Fe Railroad. In 1902 a company was organized to prospect for oil and gas. After several initial failures, gas was found and several companies began operations in the area.

By 1910, the town boasted a brick and tile manufacturing works, a flour mill, a weekly newspaper, two banks, express and telegraph offices, a post office with six rural routes, and a population of 659 people. 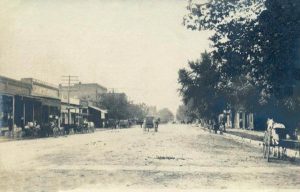 For the next several decades’ Elk City remained a small town with its population fluctuating between 600-700 people through 1940. In the meantime, the number of students in the area had again demanded the need for a new school. In 1929 a beautiful new high school was built. Previously, all grades attended school in the same building.

After 1940, Elk City’s population began to drop each decade. As more and more people continued to leave, businesses began to close one by one. The high school continued to serve students until 1970 when it graduated its last class. Sometime along the way, the grade school also closed. Elk City’s High School remained standing and silent for more than four decades until it was engulfed by fire and today only the rubble remains.

Today, Elk City is called home to just a little over 300 people and is a near ghost town with a number of abandoned buildings. Students attend school in Independence, about 15 miles to the southeast. The town still boasts a post office, a bank, and a tavern amongst its many vacant business buildings. Unfortunately, Elk City lost another historic building in May 2015 when the 1900 historic 1st Christian Church was destroyed by fire. 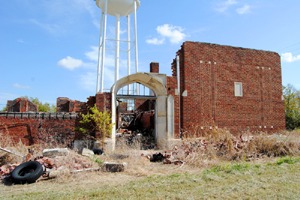 Residents and visitors alike enjoy nearby Elk City Lake, which is famous for its large catfish and provides boat ramps, a swim beach, camping, playgrounds, and hiking trails, as well as picturesque views of open prairie, wooded hills, and limestone bluffs. Wildlife watchers can see a variety of Kansas wildlife, including the large pileated woodpecker which is common in the mature trees along the Elk River. 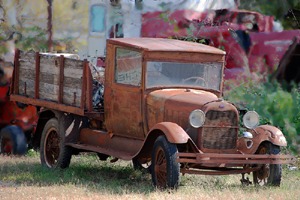 An old truck in Elk City, Kansas by Kathy Weiser-Alexander.