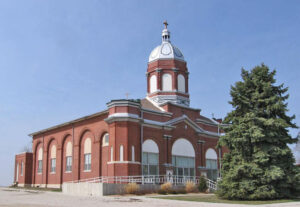 A Belgian missionary named Father Scott presided over the first Mass, which was held in the home of Edward Reddington, in May 1859. Shortly afterward construction began on a log cabin church. The church was located on prominent hilltop acreage donated by Henry Collins. Logs were hauled from as far away as Garnett.

Once completed, Father Schnacht, a Carmelite, would regularly ride from Scipio to Emerald on horseback to say Mass.

The Homestead Act of 1862 brought additional settlers to the territory. Shortly after the Civil War, the log cabin church was no longer adequate for the growing community and a new 55 x 35 foot stone church was constructed. Native stone was quarried, but sand for the mortar was not available. Consequently, parishioners manually crushed rock into sand. John Hoffman, a Burlington stone mason did the masonry work and the church was dedicated on August 15, 1870.

During the 1870s and 1880s, large numbers of immigrants flowed into Kansas. Soon Emerald became an Irish-German community. By 1895 Emerald had more than 75 families attending church. However, the post office closed that year on September 14.

Forty years after the first Mass a magnificent 55 x 100-foot Roman-style church was dedicated. Brick was used for the structure and the foundation was constructed of granite rock brought in from Texas. The majestic dome was visible from many miles away. St. Patrick’s became known as the “Cathedral of the Plains.” 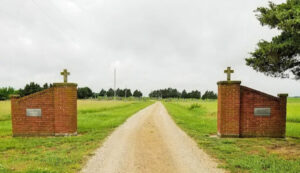 By the 1930s, America’s economy turned from agriculture to industry and by 1936 Emerald had dwindled to 48 families. Tragedy struck on September 29, 1939, when the church was hit by lightning and caught on fire. Causing $50,000 in damages and only $10,000 in insurance, the small parish was confronted with a challenging situation. However, the community was determined and the church was restored to its present state by November 1940. At this time, the bell was removed from the tower, but was preserved and stands at the entrance to the cemetery,

In 1953, under the guidance of Father Jack Herrington, the church was renovated to include improvements to plumbing, heating, and new plate glass windows and doors. In 1955 construction of the parish basement and kitchen began.

Today, the church still serves a local congregation. The crucifix over the main altar was carved by hand in Rome and took five months to make. The cemetery is located a short distance behind the church.