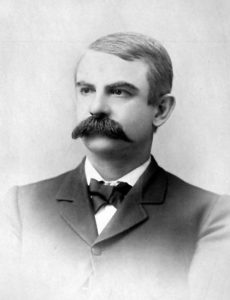 Ware was born in Hartford, Connecticut, on May 29, 1841, to Hiram B. and Amanda Melvina Holbrook Ware. He moved with his family to Burlington, Iowa, when he was still a child, and where he attended public schools. In 1861, at the start of the Civil War, he enlisted in Company E of the First Iowa infantry; re-enlisted in Company L, Fourth Iowa Cavalry, was mustered out as captain of Company F, Seventh Iowa, in June 1866. During the latter part of his service been aide-de-camp successively to Generals Robert B. Mitchell, C. J. Stolbrand, Washington R. Ellett, and Grenville M. Dodge.

He then took a section of land in Cherokee County, Kansas, in 1867, studied law, and was admitted to the bar at Fort Scott. He then went to work at the law firm of McComas & McKeighan at Fort Scott. In 1874 he married Miss Jeanette P. Huntington of Rochester, New York. He was also, for many years, editor of the Fort Scott Monitor. His political career consisted of two terms in the Kansas Legislature, 1879 to 1883, and three years as United States Pension commissioner from 1902 to 1905. He was prominent in the Republican Party and was a delegate to two of its National Conventions.

His home for some years was at Topeka, from which he moved to Kansas City, Kansas, about 1909, where he practiced law in partnership with his son until the spring of 1911 when both retired to the Ware farm in Cherokee County.  He authored several books, including The Rise and Fall of the Saloon, The Lyon Campaign and History of the First Iowa Infantry, The Indian Campaign of 1864, Rhymes of Ironquill, Ithuriel, and From Court to Court. He was also the translator of Castaneda’s account of Coronado’s March and contributed to several legal and literary publications.