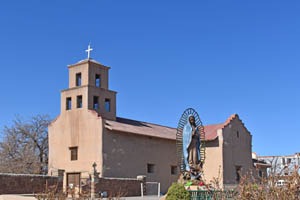 Father J.H. Defouri was an early Catholic priest in Kansas.

Defouri was born in St. John La Porte, Valley of Isere, France on August 29, 1830. He was educated for the priesthood and was ordained at Chambery, Savoy in 1854. Soon after taking orders he came to America and in November 1856, arrived at Leavenworth, Kansas, where he remained until 1862 when he was sent to Topeka. In 1865 he made a journey to his native land in the interest of the church in Kansas, and upon his return the next year he was made pastor of the Church of the Assumption in Topeka.

In September 1876, he returned to Leavenworth and in July 1877, was made vicar-general of the diocese. Some years later he left to take charge of the Church of San Guadaloupe at Santa Fe, New Mexico. Father Defouri was a liberal contributor to the Kansas Magazine and other publications of that nature on topics relating to Indians and the early Catholic Church in the southwest.