Ford, Kansas is a small town in southeast Ford County.

The town was established as a station on the Bucklin & Dodge City division of the Chicago, Rock Island & Pacific Railroad. The settlement was organized by Andrew Russell and the Ford Town Company in 1885. It was named Ford because it was the site of the only ford on the Arkansas River within the eastern part of the county. It gained a post office in February 1885 and the townsite was officially platted a couple of months later in May.

Just to the north of Ford, another town sprung up across the river called Ryansville, after Pat Ryan, an early settler in the area. It was officially platted the same year as Ford in September. The two towns quickly were in a rivalry for dealings with the railroad, but Ford ended up getting the right-of-way. When that occurred, a newspaper, two hotels a lumberyard, and a drug store moved from Ryansville to Ford. Eventually, the two towns formed the Union Town Company and 30 blocks were annexed to Ford. 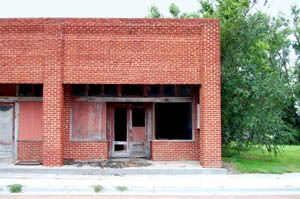 Today, Ford continues to be a small agricultural community with a population of a little more than 200 people. It is located about 18 miles southeast of Dodge City on U.S. Highway 400.