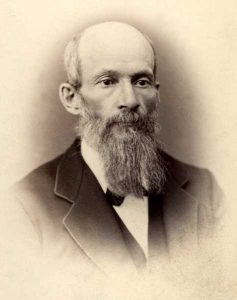 Franklin George Adams was a Free-State advocate, teacher, attorney, and publisher in the early days of Kansas Territory.

Adams was born at Rodman, New York on May 13, 1824, and was raised on his father’s farm. He attended public school before moving to Cincinnati, Ohio, where he received private instruction from an older brother. He taught in the public schools of Cincinnati, and in 1852, graduated from the law department of what is now the University of Cincinnati. He became profoundly interested in the debate on the Kansas-Nebraska Bill and determined to settle in Kansas. To this end, he joined a party from Kentucky which reached Kansas in March 1855 and settled in what is now Riley County, where they founded the Ashland Colony.

Before long, Adams returned to Cincinnati, where he married Harriet F. Clark, of Cincinnati on September 29, 1855, and taught school again. But in April 1856, he returned to Kansas and settled on a farm near Pilot Knob in Leavenworth County. He was forced to flee to Lawrence for protection during the Kansas-Missouri Border War and bore arms in defense in the Sacking of Lawrence in 1856.

He was a member of the Leavenworth Constitutional Convention, was active in the organization of the Free-State Party in Atchison, of which he was elected the first probate judge in the spring of 1858. In 1861 he was appointed Register of the Land Office at Lecompton. In September he moved the office to Topeka and held the position until 1864.

He was also identified at different times with various publications of the state among them the Squatter Sovereign, Topeka State Record, Kansas Farmer, Atchison Free Press and, the Waterville Telegraph. He was active in the formation of the State Agricultural Society and drafted the law under which it was organized. He became secretary of the State Fair Association which held the first state fair at Atchison in 1863. The next year he gave up his various enterprises in Topeka, returned to Atchison, was appointed United States agent to the Kickapoo Indians, and moved to Kennekuk, in the northwest corner of Atchison County. He resigned the agency position in 1869, and in the fall of 1870 moved to Waterville, in Marshall County, where, in 1873, he published The Homestead Guide, which provided the history and resources of northwest Kansas.

In the spring of 1875, he returned to Topeka, and the following February, the directors of the newly formed State Historical Society elected him secretary. It was in this position that Mr. Adams did his greatest and best work for Kansas. He at once started the work of organization and pursued with steady effort every avenue which he thought capable of adding to the growth and resourcefulness of the society. During his residence in Topeka, Mr. Adams was instrumental in establishing the kindergarten work among the poor. He was a long-time member of the Kansas State Grange and took a special interest in the education of children on farms. As an editor, author, and publisher Mr. Adams was enabled to make his ideas known and to turn public opinion in the right direction.  He died on December 2, 1899.