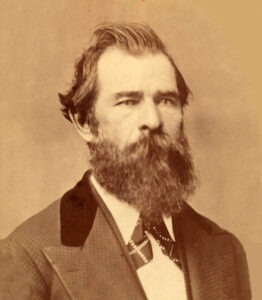 Fry W. Giles was a free state supporter, promoter of the Topeka Movement, and one of the founders of Topeka, Kansas.

Fry Williams Giles was born in Littleton, New Hampshire to John and Lydia Clements Giles on May 30, 1819.

His early years were spent working on the family farm. At the age of 15, he went to Webster, New Hampshire where he lived until he was 21 years old. He then moved back to Littleton where he operated a mercantile business and dealt in real estate. He married Caroline Ann Fellows in 1844 and the couple would have one child.

In June 1854, he moved to Chicago, Illinois, but remained there only a short time. That fall, he along with several others, made their way to Kansas, to help in the Free State cause. He arrived at Westport, Missouri in late November 1854 and made the two-day walk from there to Lawrence with several other men, including some who would be co-signers of the Topeka charter.

He arrived in what would become Topeka on December 4, 1854. He became the secretary of the Topeka Town Association, helped with a survey for town sites, and it is said that it was Giles who gave the name to the new town. He built one of the first cabins in Topeka on Shunganunga Creek and opened a small store. In March 1855 he was appointed as the first postmaster.

He also operated a freight and stage office in town.

In 1857, he was elected county recorder and clerk.

In 1864 he opened the first bank in Topeka.  Two years later, he took a partner and the business was conducted for some time under the firm name of F. W. Giles & Co. When the Topeka National Bank was founded he became its first president.

Giles was the author of a work entitled Thirty Years in Topeka, which was published in 1886. The first-person account of the birth and early growth of the capital city related many interesting incidents that otherwise might have been forgotten.

Over the years, he held many offices of trust in national, county, town, and church affairs. 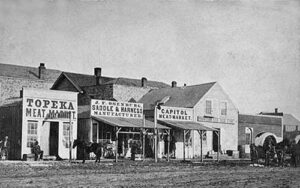