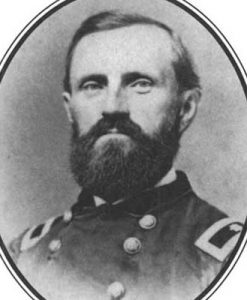 George W. Deitzler was a Free-State advocate, soldier, and politician in Kansas.

Deitzler was born at Pine Grove, Pennsylvania, on November 30, 1826. He received a public school education and moved to Kansas, where he became one of the prominent figures of the Free-State party. He was a delegate to the Topeka Convention and, in May 1856, was one of the seven men who were arrested at Lawrence and taken to Lecompton under the guard of Federal troops.

They were known as the “treason prisoners” and were kept in a prison camp for several months. During the winter of 1857-58, he was a member and speaker of the Kansas House of Representatives and was re-elected. Subsequently, he was elected mayor of Lawrence and also served as treasurer of the state university.

At the outbreak of the Civil War, he was made colonel of the First Kansas Volunteers; he was seriously wounded at the Battle of Wilson’s Creek in August 1861 and never entirely recovered. He remained in the service; however, he was promoted to brigadier-general but resigned in 1863. During Price’s Raid, he rendered great service in protecting the border. In 1864 he was commissioned as a Major-General of Kansas Militia.

General Deitzler was killed by being thrown from a carriage at Tucson, Arizona, on April 11, 1884.