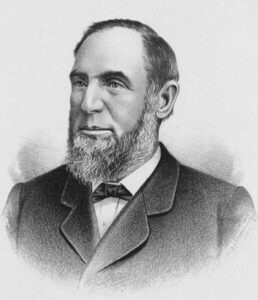 George W. Glick was the ninth governor of Kansas after the state was admitted into the Union.

George Washington Glick was born at Greencastle, Ohio on July 4, 1827, a son of Isaac and Mary Sanders Glick. When he was about five years old he moved with his parents to Sandusky County, Ohio, where his father acquired extensive farming interests and became a citizen of prominence, having been elected treasurer of the county three times in succession. Here, Glick attended public schools.

His ambition was to be a lawyer and soon after leaving school, he entered the office of Buckland & Hayes at Lower Sandusky (now Fremont), where he studied for two years. He was admitted to the bar in 1850 and began to practice in Fremont, and soon won distinction as a lawyer.

On September 17, 1857, Glick married Elizabeth Ryder in Massillon, Ohio and the couple would eventually have two children.

A firm believer in the principles advocated by the Democratic Party, he cast his political lot with that organization and in 1858 was nominated for Congress, but declined the honor. The same year he made the race for state senator against Ralph P. Buckland, one of his earlier instructors, and although defeated, led his ticket by nearly 2,000 votes. About a year before this campaign he had been appointed colonel of the Second Regiment and Judge-Advocate of the Seventeenth Division of the Ohio militia by Governor Salmon P. Chase. 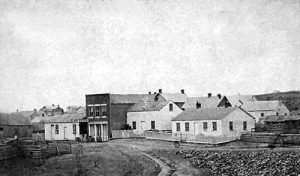 In the fall of 1858, Glick came to Kansas, settling at Atchison, where he formed a partnership with Alfred G. Otis, which association lasted for 15 years. At the election of December 6, 1859 — the first election under the Wyandotte Constitution — he was the Democratic candidate for judge of the Second Judicial District; was a member of the legislature from 1863 to 1868; the Democratic candidate for governor in 1868, but was defeated by James M. Harvey; was elected to the legislature again in 1875 and also in 1880; served as Speaker Pro Tem in the session of 1876; and in 1882 was nominated and elected governor, being the only candidate on the Democratic state ticket to win a victory.

Governor Glick had been active in political and legal affairs in many other ways. In 1866 he was elected a delegate to the Union convention at Philadelphia, Pennsylvania; he served as County Commissioner and Auditor of Atchison County; was one of the early directors of the Union Pacific Railroad and attorney for the central branch from 1867 to 1874. He was engaged in farming and stock-raising in 1874, his “Shannon Hill” farm of about 600 acres being one of the best-known farms in eastern Kansas. He was a United States Pension Agent at Topeka from 1885 to 1892; was for over 30 years a member of the State Board of Agriculture, and was involved in numerous other organizations and businesses. On December 7, 1907, he was elected first vice-president of the Kansas Historical Society.

After a long illness Governor Glick died at his home on April 13, 1911.