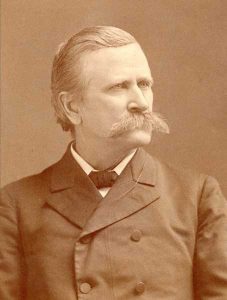 John Pierce St. John was the eighth governor of the State of Kansas and was the Prohibition presidential nominee in 1884. Under his tenure as governor, Kansas became the third state to enact a statewide prohibition of alcohol which would last until 1948 and remain in some form until 1987.

St. John was born at Brookville, Indiana on February 25, 1833, a son of Samuel and Sophia Snell St. John. He was educated in a log schoolhouse and in 1852 and at the age of 19, he crossed the plains to California. There, he was engaged in various pursuits from mining to merchandising and participated in the wars with the Indians in northern California and southern Oregon in the years 1853-54, being twice wounded. He then visited the Sandwich Islands, Mexico, Central, and South America. While working as a miner in California he decided to study law, and after his travels, he entered the office of Starkweather & McLain, of Charleston, Illinois in 1860, where he completed his studies and was admitted to the bar the following year.

When the Civil War broke out, he enlisted as a private in Company C, Sixty-eighth Illinois Infantry, and served with that regiment in Virginia until it was mustered out in November 1862. He was then commissioned as a captain and placed in command of troops that were rendezvoused in camp at Mattoon, Illinois. When the 143rd Illinois Infantry was organized, he was commissioned as a lieutenant-colonel of the regiment and continued to serve with that rank until the close of the war. Returning to Charleston, he then formed a partnership with Judge McLain, the surviving partner of the old firm with which he had studied, but a few months later, moved to Independence, Missouri, where he opened a law office and made his debut into the political arena.

In May 1869 he moved again to Olathe, Kansas, where he formed a partnership with M. V. B. Parker, an association that lasted until 1875 when it was dissolved by mutual consent. In 1872, St. John was elected to the Kansas State Senate but declined a nomination for a second term. In 1876, he was a candidate before the Republican State Convention for governor but was defeated by George T. Anthony. In 1878 he was again nominated and this time, was elected; re-elected in 1880, and was nominated for a third term in 1882, when he was defeated at the polls by George W. Glick. 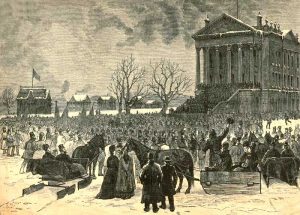 Governor St. John was an ardent temperance advocate and was the Prohibition candidate for president in 1884. The amendment to the Kansas Constitution, prohibiting the manufacture, importation, and sale of intoxicating liquors within the state, was probably due as much to his influence as to that of any other one person. It is said that in sixteen years, he traveled 350,000 miles and made 4,000 speeches, mostly on the subject of the liquor traffic, and never missed an appointment. Upon retiring from the office of governor he became interested in mining operations in Missouri. St. John died after suffering heat exhaustion on August 31, 1916. The city of St. John, Kansas, is named after him.

Compiled and edited by Kathy Weiser/Legends of Kansas, updated July 2020.