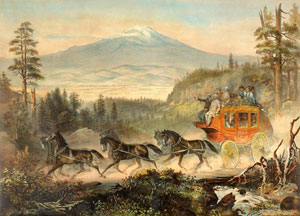 Granada, Kansas, in Nemaha County, got its start as a place called Pleasant Spring in Granada Township. It was established in 1855 at NE1/4 S12 T4S R14E. The first person to locate in the vicinity was D. M. Locknane in 1855. He was shortly followed by Messrs. Chappel, Pilant, Haigh, Searles, Vilott, Spencer, Anderson, Terrill, Wright, Letson, Knapp, Nevil, Swerdferger, O’Brien, Riley, Duwalt, Brown, and Steer. The town had one of the first wells in Kansas.

A store was built in 1856 by Manaoh Terrill, and Pleasant Spring became a station on the old overland route to Denver, Colorado. A post office was established on August 8, 1856, with David Locknane as postmaster. In 1859, David Locknane established the Granada Hotel. William Letson was a messenger on the Central Overland California and Pike’s Peak Express and the Overland Stage Route between 1859 and 1863.

By the time the Civil War began, the community was referred to as “a thrifty little town.”

On September 19, 1864, the post office name was changed to Granada, and William Letson served as postmaster. At its peak, the community had a drugstore, hardware store, schoolhouse, lodge hall, and about ten houses. With the advent of railroads to both north and south, it lost prestige. The Granada post office closed on July 16, 1906. In 1910, it had a population of 47.

It was located 17 miles southeast of Seneca, the county seat, and eight miles north of Wetmore, from which it received its mail after the post office closed.