The original site of Hamlin, Kansas, in Brown County, was two and a half miles south of its current location. A post office was established on December 5, 1857.

In 1870, the post office was moved to the present site, and the “new” town of Hamlin was laid out on 20 acres owned by A. Leonard.  At the time of its removal, the town could hardly be said to have an existence. The move was probably due to the incoming St. Joseph & Western Railway.

Mail service was initially performed at the depot by J. Rogers, the postmaster. The first building in the town was erected by Mrs. Leonard, who engaged in the millinery business. The first residence was built by J. McCuen and was shortly followed by the dwelling of William Baker.

The first school near Hamlin was a mile northwest of the town and was taught by Miss Emma Fisher in 1871. A school building erected the same year was 24 by 36 feet and one story in height. The first religious services were held in the depot, in 1871, by Reverend T. J. Hansberry, of the Christian Church. This church had been organized at Hamlin’s first site some years before.

The Congregational Church was also organized before the town moved. A church building was erected in 1873 for $2,200. It measured 30 by 40 feet and had a seating capacity of 200.

The next store was that of A. Leonard, which was destroyed by fire in 1875. That year Dr. Heath settled in the community, and Samuel Sweeney moved to Hamlin from Smith County and opened a restaurant and a grocery store.

The Christian Church building was erected in 1876 for $3,000. It measured 40×60 feet and had a seating capacity of 300. A Sabbath school was organized the same year, with a membership of 50.

In 1878, Joseph W. Dendurent settled in Hamlin, where he was a dealer in farm machinery, wagons, buggies, pumps, and windmills. He also had another location in Morrill. The first hotel was the Hamlin House, built in 1878 by Samuel Myers, who occupied it for six months and then sold it to William Murray. It was purchased in 1881 by T. J. Wilson. It was the only hotel in the town. 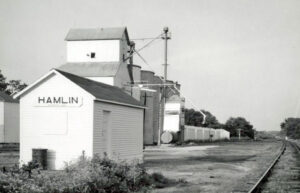 A new school building was erected in the winter of 1880-81 for $2,500. The two-story building measured 30 by 65 feet. Rooms were fitted for three departments. The first teachers in the new schoolhouse were Mrs. C. Evans and Miss F. Hitchcock. In 1882, the enrollment was 121.

In the early 1880s, Hamlin had three general stores, a grocery, a hardware store, a drug store, a millinery, a furniture store, a lumber yard, and two blacksmith shops. There was also a grain elevator measuring 20 by 60 feet, owned by J. N. Speer & Co. of Hiawatha, and a grain warehouse owned by Thomas Evans. At that time, the population was a little over 200.

In June 1882, the Hamlin steam flouring mill was built by Messrs. B. Ellis and John L. Smith for $5,700. It was equipped with modern machinery, including a 40-horse power engine and three runs of buhrs. The leading brands of flour manufactured at this mill were equal to any in the market and are known as “Golden Crown” and Lily of the Valley.” In April 1883, Charles E. Tobie purchased the Hamlin steam flouring mills. 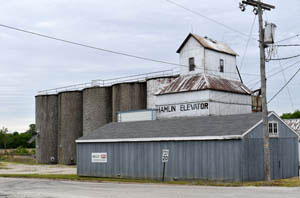 In 1910, Hamlin was an incorporated city of the third class. It was still a station on the St. Joseph & Grand Island Railroad and had a bank, a graded school, three churches, several retail stores, telegraph and express offices, and a money order post office with one rural route. Its population in 1910 was 208.

In the next decades, the population continued to decline, and the post office closed on April 13, 1973.

As of the 2020 census, its population was about 35. There are still a few scattered homes and buildings in the area. It is seven miles west of Hiawatha. 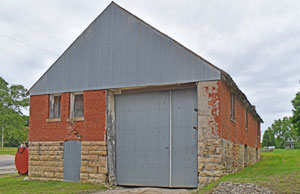 An old business building in Hamlin, Kansas by Kathy Alexander.