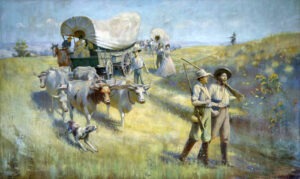 Hector, Kansas, once located within Mission Township, in Johnson County, is a vanished town today.

The first settler in the area was  John Dyche, in 1857. He soon established a productive livestock farm. An appealing area for settlers due to its gently rolling prairie, with Boone Creek running through, other people soon moved to the area including J.D. Jennison, Levy Clark, and Thomas James. In 1858 the first school was taught by John Hollingsworth, in a house belonging to Levy Clark. A schoolhouse was built in 1865. A post office was established in 1866 with John Dyche appointed as the first Postmaster.

Another prominent family moved to Kansas after the Civil War, likely due to the Homestead Act of 1862. John Pincomb moved to Johnson County in 1867 where he established a farm in Hector, on which, a small part of Indian Creek flowed through. Like John Dyche, Pincomb raised livestock and became well known for his breeding steers, heifers, and hogs. 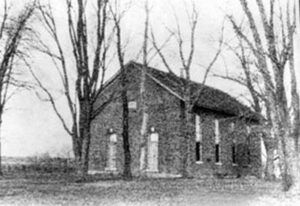 The Cumberland Presbyterian Church was organized in about 1868 and a brick church building was erected about the same time. The Methodists built the called the Linwood Methodist Church, a frame building that cost about $3,000.

In 1868, a difficulty arose between Thomas Cisad and Louis Jarbo, over an  80-acre piece of land, Jarbo was killed. Cisad made bail, left the country, and never returned.

By 1878, two railroads passed through Johnson County including the Atchison, Topeka & Santa Fe, and the Kansas City Railroads. With two railroads connections nearby, the livestock business was very profitable for early settlers.

However, other nearby towns, such as Overland Park and Mission were growing much faster than Hector and soon began surrounding the area farms and buildings. The post office closed on June 5, 1884, but reopened on November 8, 1895. It then closed its doors for the last time on June 15, 1900, and the remaining land and buildings were incorporated within the growing cities around them.

However many people stayed in the area and the 1902 Standard Atlas of Johnson County, Kansas, shows a cluster of the school, church, and cemetery, just to the east of Dyche land, along Boone Creek. John Pincomb’s son Charles eventually became prominent in the Overland Park State Bank. Gravestones remain in the Linwood Pioneer Cemetery in Leawood, Kansas, and in the Corinth Cemetery in Prairie Village, Kansas.

Hector was once located at the intersection of 87th Street and Nall Avenue.