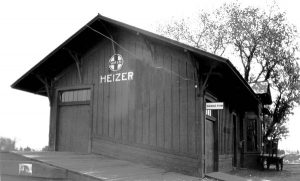 The town got its start in the late 1880s as a stop on the Atchison, Topeka & Santa Fe Railroad. The settlement was first called Heizerton after David N, Heizer, a founder of Barton County and the former mayor of Great Bend who once owned the land that Heizer was built on.

In 1886 the railroad built a depot that measured 24′ x 42′, and the first store was established by D. E. Freyberger, who later sold out to Reinicke & Sons. A creamery was established by Schwier and associates shortly after the town was laid out that would operate for several years. The community received a post office on April 4, 1887. On March 20, 1891, the post office and the town’s name were changed to Heizer.

In the next decades, several other businesses were established, including a blacksmith shop, hotel, stockyard, lumberyard, church, school, several grain elevators, general stores, a hardware store, and a bank. The population peaked at 100 in the early 1900s, but it steadily began to fall afterward. Like many other Kansas settlements, the town was particularly hit hard during the Great Depression and the Dust Bowl in the 1930s.

On May 15, 1954, the town’s post office closed its doors forever and none of its former businesses continue to operate today. The old town is now comprised of several homes, farm buildings, and about 20 people. 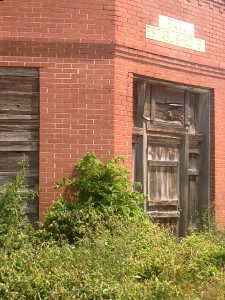 Heizer is located about eight miles northwest of Great Bend on Kansas Highway 96.