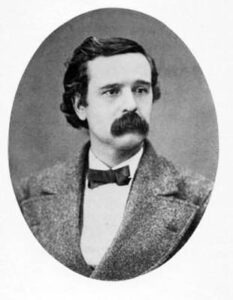 Inman was born in New York City on July 30, 1837, to Henry Inman, an artist and president of the National Academy of Design, and Janet Riker O’Brien Inman. He was educated in public schools in Brooklyn, New York. His father died when he was a child, and he was raised by his mother on a small farm near Hempstead, Long Island, for about five years before going away to the Athenian Academy in Rahway, New Jersey. He also received college preparation from tutors.

At the age of 20, Inman joined the army in 1857 and served in Indian campaigns in the 9th Infantry Regiment in Oregon and California. Somewhere along the line, he met William F. “Buffalo Bill” Cody, who he scouted and fought with on the frontier.

On the outbreak of the Civil War, he was transferred to the 17th Infantry, Army of the Potomac in 1861. He was commissioned a Second Lieutenant by October 1861. During the Peninsula Campaign, he served as an aide on the staff of General George Sykes. He fought in the Seven Days Battles in Richmond, Virginia, and suffered severe wounds. For gallant conduct at Gaines Mills on June 27, 1862, was breveted a captain. On October 22, 1862, he married Eunice Churchill Dyer, the daughter of a shipbuilder in Portland, Maine. The couple would eventually have four children. In the next two years, he served in the Quartermaster’s Department. 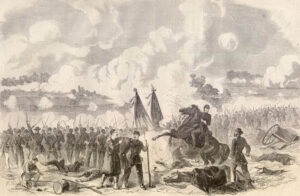 After the Civil War, he served the 1868-1869 Indian Campaign in Kansas under General Philip Sheridan. He was brevetted Lieutenant-Colonel on February 11, 1869.

During the Indian Wars, he also served under Generals George Armstrong Custer, Alfred Sully, and Alfred Gibbs. Stationed at Fort Harker, Kansas as a paymaster, he was tried for embezzlement and other financial issues from 1870 to 1872 and was dismissed due to what may have mainly been carelessness.

Afterward, he stayed in Kansas, and in 1878, he began working as a journalist for the Larned Enterprise. He often wrote of his adventures on the plains and western frontier, and his short stories were printed in several magazines and newspapers. In 1881, several sketches of adventure were published in Stories of the Old Santa Fé Trail.

In 1882, Inman became the manager of the Kansas News Agency at Topeka and was subsequently employed in various newspapers in the state. Another collection of stories — In the Van of Empire, was published in 1889. More books would follow, including The Old Santa Fe Trail, in 1895, which was widely read. Later, he wrote The Great Salt Lake Trail, The Ranch on the Oxhide, Tales of the Trail, Delahoyd Boys, and others. He was on the board of directors of the Kansas Historical Society. 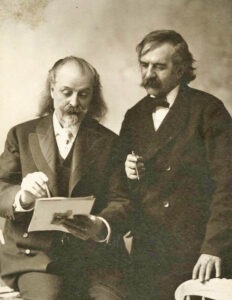 For several years before his death, Inman was in feeble health, and he left several unfinished manuscripts. He died in Topeka, Kansas, on November 13, 1899.

In his later years, he separated from his family, living in a small hotel in Topeka. He lived frugally but spent lavishly on a blind boy he had met in a hospital. In his last few years, he ran through the significant royalties he received, so much so that he was in debt.

Lake Inman and the nearby town of Inman, Kansas, were named for him.

Early Traders on the Santa Fe Trail by Henry Inman

Fighting the Comanche on the Santa Fe Trail by Henry Inman

Incidents on the Santa Fe Trail by Henry Inman