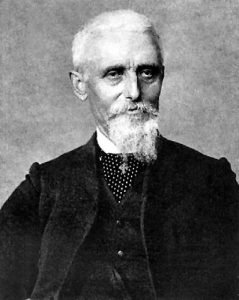 Henry Worrall was one of Kansas‘ first artists.

Worrall was born in Liverpool, England on April 14, 1825. His father was an editor, who came to America in 1835 and settled in Canada but Henry soon went to Buffalo, New York, where he sold newspapers on the streets. Later he went to Cincinnati, Ohio, where he followed the trade of glass cutter and studied music. He showed marked musical ability and while in Cincinnati composed a guitar piece entitled, Sevastopol, which became famous. The sale of the piece made a fortune for the publishers, though Worrall received only a small price for it.

He came to Kansas in 1869 on account of his health; settled at Topeka and became interested in the welfare of the city and state. He devoted himself for some time to the cultivation of grapes and planted one of the finest vineyards in Shawnee County. In 1869 Worrall became well known for his picture Drouthy Kansas, which depicts the state’s crops in an exaggerated manner and was one of the best advertisements Kansas ever had, copies of it being printed and distributed all over the country. He became noted as a musician, artist, composer, and woodcarver, as well as playing more than 20 different instruments and inventing several wind instruments made of wood and straw.

Worrall made the large wood carving of the seal of Kansas surrounded by products of the state, which was exhibited at the Centennial Exposition at Philadelphia, Pennsylvania in 1876 and which was on view at Mount Vernon until 1910 when it was returned to Kansas and placed in the museum of the Kansas State Historical Society at T Topeka. During the Centennial Exposition Worrall was employed by the Atchison, Topeka & Santa Fe Railroad Company to write articles that would draw immigration to Kansas. He was always active in representing Kansas at state fairs and industrial expositions. He made crayon portraits of members of the supreme court and an oil portrait of Governor Thomas Osborn, which hangs in the museum of the State Historical Society. He died at his home in Topeka on June 20, 1902. 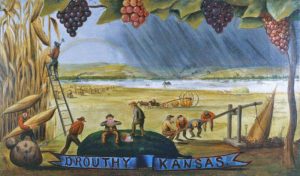