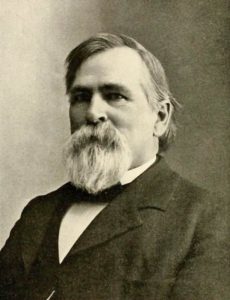 Horace L. Moore was a Kansas banker, soldier, and member of Congress.

Moore was born in Mantua, Ohio on February 25, 1837. He received his education in the district schools and the Western Reserve Eclectic Institute at Hiram, Ohio. He then taught school at Yankeebush, near Warren, Pennsylvania, when only 17 years old.

In 1858 he moved to Kansas with his brother Francis, who died a month after their arrival in Atchison County. Moore taught a six months’ term of school at Barry, Clay County, Missouri during the winter of 1859-60. In 1860 he entered the law office of Christian & Lane, where he studied until he enlisted in the army on May 14, 1861, as a private in Company D, Second Kansas Infantry, a three months regiment.

In the organization of his company he was made a corporal and served until October 31, participating in all the actions of the regiment. The day he was mustered out, he re-enlisted and on December 11, 1861, and was made the second lieutenant on the reorganization of Company D. On May 1, 1862, he received his commission as a first lieutenant and was promoted to the captaincy of his company in 1863, but never mustered, as he was commissioned lieutenant-colonel of the Fourth Arkansas Cavalry by the Secretary of War and mustered into that regiment on February 18, 1864.

In the meantime, he married Esther Amelia at Ravena, Ohio on September 16, 1864, while continuing to hold his command until mustered out of the service on June 30, 1865. 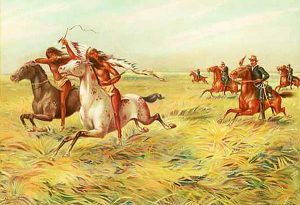 In 1867, with the rank of major, he commanded a battalion of cavalry, called the Eighteenth Kansas, during its service on the plains against hostile Indians. On October 30, 1868, he was mustered in as lieutenant-colonel of the Nineteenth Kansas Cavalry and on March 23, 1869, was promoted to colonel. With this regiment, he took part in the campaign conducted by General Philip Sheridan, which resulted in forcing the hostile Indians back upon their reservations. At the close of the war Moore engaged in the grocery business at Lawrence, Kansas, in Trinidad, Colorado; Las Vegas and Albuquerque, New Mexico, under the firm name of Moore, Bennett & Co., but in 1882 he sold his interest in the business and returned to Lawrence.

Subsequently, he was treasurer of Douglas County for two years. In 1892 he was nominated and elected to Congress by the Democrats and Populists but was not seated until August 2, 1894, as Edward H. Funston had been given the certificate of election and was not unseated until that time.

After retiring from Congress, Moore resided in Lawrence, was the president of the Lawrence National Bank and took a deep interest in all historical matters, was a long-time member of the Kansas State Historical Society, and was its president in 1906. He also spent much time compiling a record of the Moore family. He died on May 1, 1914.