Hyatt, Kansas in Anderson County, was formed by a colony in Lawrence, Kansas, who wanted to settle the county. 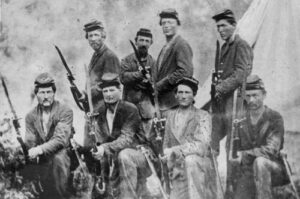 The colony was formed by Thaddeus Hyatt and W. F. M. Arny, in December 1856. The colony numbered about 80 men, who had been discharged from the Free State Militia on November 30, 1856.

Captain James A. Harvey and his men had been pro-slavery prisoners in Missouri before making their way back to Lawrence. Most of the men who joined the colony were unmarried.

On December 18, they selected the proposed townsite in Washington Township. At that time, there were only three families in the western part of the county. Claims were selected by the colonists on Cedar and South Pottawatomie Creeks. They lived in tents all winter, after which they moved to their claims.

While in camp they prepared timbers and built a hotel, store, and blacksmith shop on the townsite. The Town Company was formed in February 1857, with W. F. M. Arny, President, and C. J. Farley, Secretary. The town was platted and named for Thaddeus Hyatt. The plat of the townsite was then filed in the district land office at Lecompton, Kansas, and in the office of the Probate Judge of the county. It was the project of its founders to make this town the county seat.

In the spring of 1857 a sawmill was built, and the next fall a gristmill was attached. During the summer a store selling dry goods and groceries was opened by B. F. Allen. Unfortunately, during the summer of 1857, there was much sickness and many deaths, and a cemetery was established south of the town. 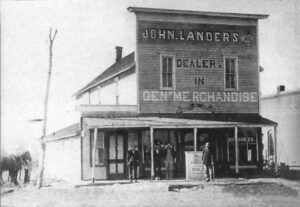 A post office opened on September 10, 1857, with W. F. M. Arny as the postmaster. It was probably the first post office in Anderson County.

In 1858 a school was established with Josephine Ramsey, as the teacher. At about the same time a city park was made. There was a stage/wagon stop where five trails crossed going to different towns.

The town declined in 1859 when many of its citizens followed the Colorado Gold Rush and the county seat was permanently located at Garnett. However, the town prevailed for several years, until its post office was closed on March 14, 1867.

Nothing remains today of what was once the principal town of the county.