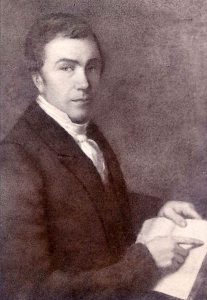 Isaac McCoy An Indian missionary who worked with several tribes in Kansas and established the Delaware Baptist Mission in Wyandotte County.

McCoy was born near Uniontown, Pennsylvania on June 13, 1784. The next year his family moved to Kentucky; where he grew up. In 1817 he began his work as a missionary among the Miami Indians in the Wabash Valley in Indiana. In the spring of 1820 he went to Fort Wayne, Indiana and in December 1822, followed the Potawatomie Indians to Michigan, becoming the founder of the Grand River Mission in 1826.

Two years later he was one of the commissioners appointed to visit the western country and select homes for the Ottawa and Potawatomie tribes. In January 1829, he visited Washington and made a report of his investigations, and in July he again started west. In 1837 he was sent by the government to survey the Delaware Indian lands and while on this work he made arrangements for missions among the Otoe and Omaha; held a council with the Pawnee; visited the Cherokee and Creek and assisted in adjusting the boundaries of their reservations.

He made a report proposing locations for the Potawatomie, Ottawa, Miami, New York tribes, and some others. His report was accepted by the government and he remained with the Indians on their reservations until 1842 when he went to Louisville, Kentucky to assume the management of the work of the American Indian Mission Association. McCoy was the author of a History of Baptist Indian Missions. He died in Louisville, Kentucky in 1846.