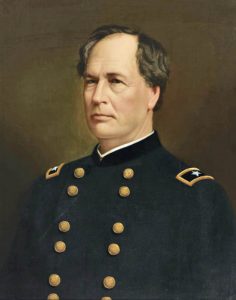 James William Denver was the secretary and governor of the Territory of Kansas.

Denver was born in Winchester, Virginia, on July 23, 1817. He was reared on a farm, attended public schools, and went with his parents to Ohio about the time he was of legal age. There, he studied engineering and, in 1841, went to Missouri to engage in the practice of that profession. The following year, he returned to Ohio and studied law, graduating from the Cincinnati Law School in 1844.

In 1847 he was commissioned as a captain of a company in the Twelfth United States Infantry and served under General Winfield Scott in Mexico until the close of the Mexican-American War in July 1848. He then moved to Platte City, Missouri, where he practiced law until 1850, before going to California. While serving in the California State Senate, he got into an altercation with Edward Gilbert that escalated into a duel, in which Gilbert was killed. In 1853, Denver was elected Secretary of State of California, and the next year was elected to Congress. He served but one term, after which he was appointed commissioner of Indian affairs and came to Kansas in the spring of 1857 to make treaties.

The following December, he was appointed Territorial Secretary and subsequently was appointed governor. While governor of Kansas, he was active in securing the erection of the Territory of Colorado, and in his honor, the Colorado Capitol bears his name. On October 10, 1858, he resigned his position as governor to engage in the practice of law.

In August 1861, he was commissioned brigadier-general of volunteers by President Abraham Lincoln and served until in March 1863, when he resigned. For a time, he practiced law in Washington, D.C., and then moved to Wilmington, Ohio. He was defeated for Congress in that district in 1870, and in 1884 his name was mentioned as a probable candidate for the Democratic nomination for the presidency. On September 3rd of that year, he attended the old settlers’ meeting at Bismarck Grove, near Lawrence, Kansas, where he delivered an address. Governor Denver died in Washington, D.C., on August 8, 1894.