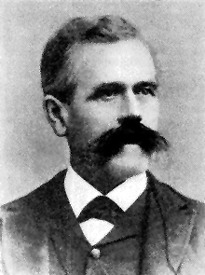 James Madison Harvey was the fifth governor of Kansas after her admission as a state.

Harvey was born in Monroe County, Virginia, on September 21, 1833, to Thomas and Margaret Walker Harvey. While still in his childhood, the family moved to Rush County, Indiana, then to Iowa, and later to Adams County, Illinois. Harvey received his education in public schools, afterward becoming a surveyor.

In 1854 he married Charlotte R. Cutler of Adams County, Illinois, and in 1859 they moved to Kansas, settling in Riley County. When the Civil War broke out in 1861, he organized a company at Ogden, Kansas, that was mustered into the United States service at Fort Leavenworth as Company G, Tenth Kansas Infantry. He was commissioned captain of his company, and when the Fourth and Tenth regiments were consolidated, he retained his rank in the new organization. In 1864, he was mustered out and returned to his farm.

The following year, he was elected to represent Riley County in the State Legislature’s lower house and was re-elected in 1866. During the years 1867-68, he was a member of the State Senate from the Seventh District, composed of Marshall, Riley, and Shirley (now Cloud) counties. In 1868, when some of his friends urged him to run for governor, he looked over the field and concluded that he was not financially able to make the race. At this juncture, a friend came to him and voluntarily offered to furnish him with sufficient money to pay his campaign’s expenses. Harvey then borrowed $200, which paid all his expenses, received the nomination, and was elected. Harvey was re-elected governor in 1870 by an increased majority, and upon retiring from the office in January 1873, he resumed his old occupation of a surveyor.

He was thus employed in western Kansas when he was elected to the United States Senate to fill the vacancy caused by Alexander Caldwell’s resignation, the term expiring on March 4, 1877. While in the Senate, he served on several important committees, and at the expiration of his service, he again took up the life of a private citizen on his farm near Vinton in Riley County. Between 1881 and 1884, he was engaged in doing surveys in New Mexico, Arizona, Utah, and Nevada.

Ill health in 1884 led him to return to Virginia, where he spent six years — three in Norfolk and three in Richmond — but in 1890, he came back to Kansas. He died near Junction City, Kansas, on April 15, 1894, and was buried at Highland Cemetery in Junction City.