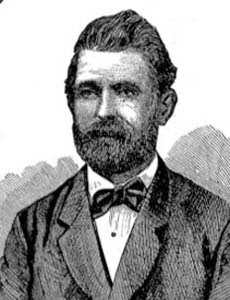 John Davis was a Free-State advocate and member of the Kansas Congress.

Davis was born near Springfield, Illinois on August 9. 1820. His parents were pioneers, the father a farmer, public-spirited, and of strong, sturdy character. John attended public schools and at the age of 20, left the farm to enter the Springfield Academy, preparatory to a course in the Illinois College at Jacksonville. In 1850, he opened a prairie farm in Macon County, Illinois about 10 miles east of Decatur. To this farm, he brought his wife, Martha Powell, a native of Wisconsin and a woman able to cope with the difficulties of frontier life. Davis actively favored the government endowment of agricultural colleges. He took a leading part in the anti-slavery movement, and as a member of the Republican Party, he stood by the Union cause during the Civil War.

In 1872, he moved with his family to Kansas settling on a farm two miles from Junction City. The following year he was elected president of the first Kansas Farmers’ Convention, and he was one of the organizers of the Greenback Party and its successor, the People’s Party. In 1890 he was elected as a Populist to represent the Fifth District in Congress and was re-elected in 1892. In 1875 he purchased the Junction City Tribune and conducted it until 1895. He was a writer of ability, published several books and pamphlets in support of his opinions on public policy, and was the author of a Life of Napoleon.

He died at the residence of his daughter in Topeka, Kansas.