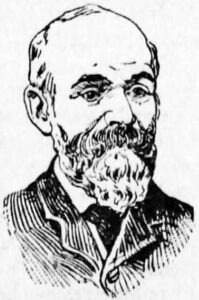 John Grant Otis was a lawyer, soldier, and member of Congress in Kansas.

Otis was born near Danby, Rutland County, Vermont, on February 10, 1838. He received his early education in public schools and then took an academic course at Burr Seminary. Subsequently, he attended Williams College at Williamstown, Massachusetts, for one year and Harvard Law School for one year. In the spring of 1859, he was admitted to the bar of his native county.

The same year he came to Kansas and settled at Topeka. During the Civil War, he actively recruited the first regiment of Kansas Colored Infantry in 1862. At the time of the Confederate General Sterling Price’s Raid in 1864, he was a member of the Second Kansas Infantry and took part in all the movements of his regiment.

At the close of the war, he engaged in the dairy business near Topeka. He was always interested in questions about farming; became a member of the Grange, the Farmers’ Alliance and Industrial Union; served as state agent for the Grange from 1873 to 1875, and state lecturer from 1889 to 1891.

In 1900 he became the candidate of the People’s Party and was elected to Congress on that ticket, serving one term. He was an unsuccessful candidate for re-nomination in 1892. He then engaged in his former business pursuits until he died in Topeka, Kansas, on February 22, 1916. He was interred in Topeka Cemetery.