Juan Jaramillo was a Spanish soldier and narrator, who was with Francisco Vasquez de Coronado when he was searching for the Seven Cities of Cibola and the country of Quivira (1540-42).

Some historians of the expedition refer to Jaramillo as “Captain,” alluding to the fact that he was evidently a man of some prominence and influence.

During the expedition, Jaramillo and Pedro de Castaneda documented their travels, providing detail regarding rivers, mountains, natural landmarks, and natives they encountered.

Their detailed accounts describe geographic details that the terminus of Coronado’s Expedition was somewhere in central or northeastern Kansas. The first of these landmarks is the crossing of the Arkansas River, near where the Santa Fe Trail crossing was later established. Jaramillo said that when the Indian guide, Isopete, saw the Arkansas River he recognized it as the southern boundary of Quivira. The report also states that afterward, the men traveled for three days along the north bank of the river. 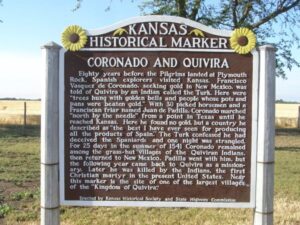 Kansas marker giving a brief history of Coronado’s travels to the area in 1541 located along US Hwy 56 west of Lyons, Kansas.

The Kingdom of Quivira

The Mythical Seven Cities of Cíbola