Folk tales and folk songs, compounded of dreams, idle imaginings, and wish fulfillment, are usually based on the prosaic doings of men who “earn their living by the sweat of their brow.” In Kansas, the first workers were the farmer and the cowboy. Within the short span of three decades, their not so heroic figures were draped with a spangled mantle of lore and legend. 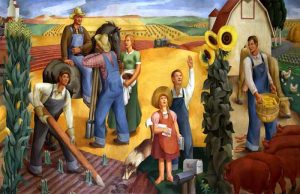 The 20th century did not deal kindly with the farmer. His legends became all but obsolete, and his beliefs were pared away by the professors at colleges of agriculture. Even the farm-bred bards who twanged guitars before radio microphones preferred I’m Headin for the Last Roundup to Turkey in the Straw or Father Put the Cows Away. Agronomists showed the absurdity of planting crops by the phases of the moon; meteorologists disproved many hitherto infallible weather omens, and bacteriologists dispelled the hobgoblins who once merrily soured cream and addled eggs. Nature, in short, ceased to be mysterious, and the farmer became more of a workman.

The cowboy, however, became a figure of magnificent proportions. Bowlegged and gaunt, he stood as the apotheosis of manly perfection. Songs, novels, movies, magazines, and operettas made the least inquiring of us well acquainted with his extraordinary courage, unfailing gallantry, and an uncanny skill with gun or lariat. The farmer, meanwhile, sat stolidly on his tractor, bereft of romance and adventure.

There was a time when farming in Kansas was not without perils. One story goes that Lem Blanchard went forth one afternoon in mid-July to inspect his cornfield in the Republic Valley. He scaled a young stalk to overlook the forest-like field and saw into the next county from its top. When he turned to descend, he was horrified to find that the stalk was growing upward faster than he could scramble down. For two days, he made back-breaking efforts to reach the ground. At last, to keep him from starving to death, kind neighbors who had tracked him to the foot of the towering stalk shot Lem dead.

Some say that a balloonist rescued Lem but, that seems improbable. If Lem had not perished on the cornstalk, surely other of his adventures among the gigantic squash, pumpkins, and taters on his farm would have been recorded. Lem would have saved himself if the corn had been mature. Another farmer caught in a similar predicament subsisted on raw ears of corn. When the cornstalk ceased growing, enabling him to descend, he found that 40 bushels of corncobs had accumulated below his perch.

The enormous stalks of corn were, of course, grown on vast fields. There was one man whose field was so wide that by the time the mortgage was recorded on the west side, the mortgage on the east side had come due. The hired man and hired girl, following their wedding, went out to milk the cows that grazed on the west side. When they returned, they had a child one-year-old.

The winds that swept across the big farms often reached hurricane velocity. The ducks’ feathers were invariably blown onto the chickens, and the chickens’ feathers were invariably blown onto the ducks. Frequently the wind scooped the cellar from beneath the house but left the house intact, hoisted the well from under the pump but left the pump intact, and carried the whole farm away but left the mortgage intact. An inexperienced dog dared to bark at an approaching “twister.” The ensuing entry of air turned the animal inside out. 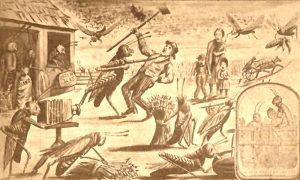 The grasshoppers that ravaged the big farms were as large as mules. Champing huge mandibles and lashing great antennae, the monster insects deliberately bullied the hogs, cows, and sheep. Nothing escaped their voracious appetites. Wagons and well platforms were favored tidbits. Armed with ax handles, buggy whips, and pitchforks, the gargantuan hoppers fought viciously in fence corners for the last ear of corn. After devouring the crops, they would insolently pick their teeth on the barbs of the barbed-wire fence.

The belief that “rain follows the plow” was held by many a Kansas farmer in the 1880s. When the drought was persistent, professional rainmakers were frequently enlisted to coax the reluctant clouds. A popular method of producing rain consisted of killing a snake and “hanging it belly-side up on a fence.” In the great drought of the 1890s, an all but despairing Bohemian farmer ruefully told a passerby: “I’ve killed three snakes and hung them on the fence, and each time we got a sprinkle of rain. If I could find enough snakes, we’d get plenty of rain.” The belief that dead snakes suspended belly-side up on a fence would bring rain is said to have originated before the invention of barbed-wire fences in 1874. When laid on a rail or stone fence, rigor mortis would invariably cause the snake to twist over onto its belly and thus prevent the “charm” from being followed to the letter. 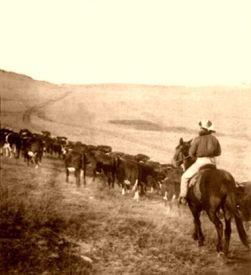 Barbed wire fences enabled Kansas farmers to penetrate a dorsal segment and fix the snake in the prescribed position. Thousands of snakes were properly strung on barbed-wire fences, their white-scaled bellies glistening in the brassy sun-glare. But, strange to relate, Nature seldom reacted favorably to the sacrifice of serpents.

The lore-manufacturers of the cattle trails scorned to imitate the extravagances born of the farmers’ hopes and fears about mysterious Nature. The cowboy was a man in full, a rootin’ tootin’ son-of-a-gun, tougher than the leather of his saddle. Had he met a “big wind,” he would have galloped dead against it; had he encountered a giant grasshopper, he would have peppered the insect with his six-shooter.  Indeed, the ordinary activities of the cowboy out-fictioned the farmers’ folk fiction. The puncher rode hard, shot fast, drank copiously, and, as verified by subsequent exhumations, often died with his boots on. In his midst moved Bat Masterson, “Wild Bill Hickok, Doc Holliday, Big Nose Kate, and other interesting people.

On arriving at Newton, Wichita, Abilene, and other Kansas cowtowns, the pleasure-starved cowpunchers engaged in mad bouts of drinking, gambling, and dancehall cavorting. Sometimes they “painted the town red” by galloping through the streets and firing their “shooting irons” into the air.

At Medicine Lodge, the cowboys held horse races down the main street; at night, they built bonfires and took turns riding forward to see whose horse would run nearest the flames. The old saying “There is no Sunday west of Newton and no God west of Pueblo” aptly described the Kansas cowtowns.

The cowboy’s speech was crisp and pungent. The farmer was a “nester” or “drylander,” and an inquisitive person an “eyeballer.” Courting was termed “sittin her,” traveling by a circuitous route was known as “anti-godlin,” and to make your best effort was “to cut a rusty.” The phrase “wild and woolly” is said to have originated in Dodge City, where the stock answer to a query about one’s past was: “I came up the Chisholm Trail with the buffalo wild and woolly.”

Each cowtown had its badmen who, if court records are reliable, were mighty, mighty bad. When badman Jack Coulter was killed at Coronado in 1887, his trigger finger is said to have jerked desperately for a half-hour after he died. The badmen had a sadistic sense of humor. 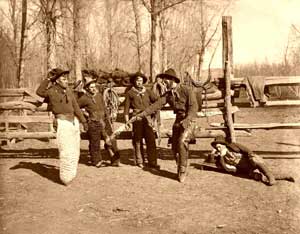 Sometimes they made citizens dance by shooting at their feet. Or again, by way of mild diversion, a badman tested his aim by shooting through the hat of a passerby. One such William Tell in Gray County, whose hand was unsteady from drink, pierced both the hat and head of his target.

The hardboiled, devil-may-care attitude of the cowboy shielded a shy, brooding nature. His fatalistic philosophy was often a social pose that he upheld publicly but disavowed in private. The cowboy was deeply concerned with an untimely end, whether it found him booted or abed, strongly indicated by his songs and ballads. Sam Bass, Mustang Gray, The Cowboy’s Dream, and The Dying Cowboy evidence a preoccupation with death, which is at direct odds with the generally accepted picture of a swashbuckling puncher with two guns on his hip and an “itching trigger finger.” That the cowboy was also concerned about an afterlife is illustrated in the following:

Last night as I lay on the prairie
Looking up at the stars in the sky
I wondered if ever a cowboy
Would go to that sweet by and by.

The trail to that fair mystic region
Is narrow and dim all the way,
While the road that leads to perdition
Is posted and blazed all the way.

They say there will be a grand round-up,
Where cowboys like cattle must stand,
To be cut by the riders of judgment
Who are posted and know every brand.

Perhaps there will be a stray cowboy
Unbranded by anyone nigh
Who’ll be cut by the riders of judgment
And shipped to the sweet by and by. 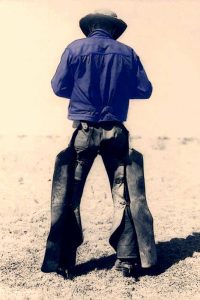 The Kansas reservoir of superstitions was fed by streams from the general pool of American taboos and beliefs. A small percentage of the population believed that a tipped new moon presages frost, that surface crops should be planted in the light of the moon and underground crops in the dark of the moon, that bad luck follows spilled salt or a broken mirror. That misfortune could be warded off by knocking on wood. Beliefs prevalent among Kansas children included “stamping a white horse,” the ubiquitous “bread and butter” incantation used in passing on opposite sides of a post, and the performance of “thumbs” when two persons say the same word simultaneously.

By the early 1900s, Kansas African-Americans discarded their heritage of Southern superstitions and acquired, in varying degrees, those of his white neighbor. However, many still believed that if the church bell gave an after toll, a member of the congregation would soon die; that bad luck would come if a broom struck someone; and that a sleeping person would tell his dreams if his hand was placed in cold water. The last was said to have been a fundamental and useful tenet in the credo of wives. 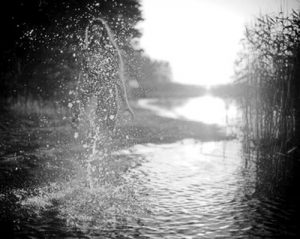 In the early 20th century, the imaginations of rural Kansans were relatively lax in populating empty houses and lonely lanes with “hants” and creatures of the underworld. Several such manifestations were reported periodically. Greeley County has its Ghost of White Woman Creek, a white-clad shade who, according to legend, drowned herself in the creek when she found her lover lying dead on its bank. A “giant panther” was said to inhabit the farming district along a draw northwest of Norton. Tales of the beast’s fiery eyes and hideous screeching were intermittently revived. Since the 1890s, residents of Wallace County reported seeing a strange light bob across the countryside. Some asserted that the light was the ghost of a man murdered, but the more literal-minded explained the phenomenon as a phosphorescent glow arising from decaying bones on the prairie.

Compiled and edited by Kathy Weiser/Legends of Kansas, updated July 2021.

About the Article: Most of the historical text in this article comes from Kansas, A Guide to the Sunflower State, written by authors working for the Federal Writer’s Project, Viking Press, New York, 1939. However, other sources have also been used, the content combined, and heavy editing has occurred, resulting in much change from the original.