Southwest Kansas is filled with grassy plains by Kathy Weiser-Alexander.

The High Plains of southwest Kansas are known in history for the Santa Fe Trail, cowtowns, and its semi-arid terrain, which limited agricultural pursuits until the advent of irrigation. What it is not known for is any type of forest. 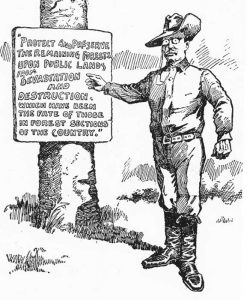 Things would change when President Theodore Roosevelt decided that the area would benefit from the creation of a forest in this dry land in 1905.

Roosevelt, who believed that nature existed to benefit humanity, promoted the conservation of natural resources as part of his Square Deal program. Utilizing the 1891 Forest Reserve Act, which gave the President authority to create forest reserves from land in the public domain, Roosevelt designated 80,000 acres of land in the sandhills of southwest Kansas as the Garden City National Forest Reserve in 1905. At the time, the idea did not seem far-fetched as the US Forest Service had considerable success in planting trees on the Nebraska Sandhills a few years previously,

Through Roosevelt’s plan, water could be used to irrigate semi-arid farmlands to grow forests where animals could be hunted for food, timber used for building, and the hope was that the trees would draw moisture to the region.

The forest reserve in Finney County was just one of 150 such national forests created by Roosevelt. Toward the end of his presidency, he had more than doubled the forest reserve acreage nationwide.

“We have fallen heirs to the most glorious heritage a people ever received, and each one must do his part if we wish to show that
the nation is worthy of its good fortune.”

Planting began in 1906, with 50,000 two-year-old yellow pines, 30,000 one-year-old honey locusts, hackberry, and Osage orange trees. Planting continued until some 1,000,000 trees were planted. However, only 27% of the pine and 32% of the honey locust lived through the first season, and all other species failed completely.

More trees followed the next year, but disaster struck when a prairie fire destroyed over 200 acres and many of the saplings. However, the Forest Service was undeterred and soon expanded the forest boundaries to 302,387 acres south of the Arkansas River in the sandhill region that included parts of Finney, Haskell, Kearny, Grant, and Hamilton Counties and stretched all the way to the Colorado state line.

A federal nursery was established in 1908 two miles west of Garden City and a government office was also established with B. R. H. d’Allemand named as forest supervisor. D’Allemand was selected for this reserve because of his experience in both forestry and grazing administration and he helped with the nursery and planting operations in the Nebraska National Forest Reserve in 1903-1905. The supervisor had two assistants, one in charge of nurseries, and the other had charge of range administration.  That year, the forest was renamed Kansas National Forest.

For several years more trees were planted with the goal of continued planting until the entire tract was covered with saplings.

In 1911, two more nurseries were established about a mile south of Garden City for the purpose of testing out trees grown on heavy soil and on sandy soil using a variety of tree species including pines, spruce, cedars, and hardwoods of different ages. However, that same year, a severe drought occurred that killed 90% of the trees.

More trees were planted in the next few years but never grew more than two feet tall. Jack pine that had done very well in Nebraska didn’t survive in Kansas due to supreme drought, greater heat, and the severity of the summer winds. Even the hardy red cedar died in droves. By 1915 it was clear that the experiment had failed and President Woodrow Wilson abolished the forest.

In December 1915, approximately 3,200 acres, were deeded to the state as a “big game preserve” and the rest of the land was opened for homesteading.

“All of the former Kansas National Forest is now grown up to soapweed, cactus, and clear, invigorating prairie air.”

Today the former game reserve is called the Sandsage Bison Range Wildlife Area. Managed by the Kansas Department of Wildlife and Parks, the first bison were brought here from Oklahoma in 1924. Today, it is the oldest publicly owned herd in Kansas.

The range is located about a mile south of Garden City and extends a distance of three miles back into the sandhills. In addition, to the bison, a variety of game birds call the area home. Just a few of the trees that survived can be seen on the range.