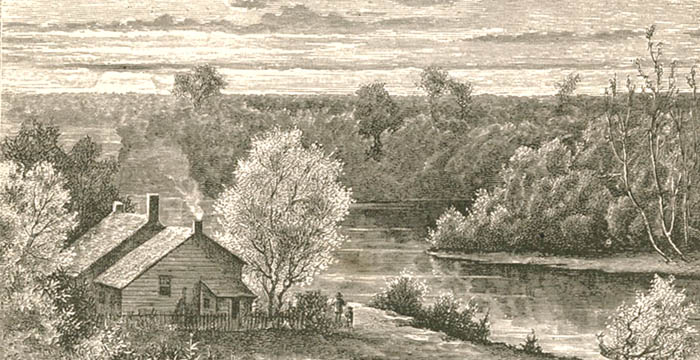 The Kansas & Neosho Valley Railroad (K&NW) was incorporated in March 1865, with the objective to build a line from Kansas City south into the Neosho Valley of eastern Kansas, and then continue south all the way to the Gulf of Mexico. Kersey Coates, of Kansas City, was President of the railroad. The railroad, also known as the “Border Tier Line”, was to go through Rosedale to Olathe then south to Baxter Springs, Kansas along the border tier counties of Kansas. There were just a few scattered residents in the valley in 1865 and the railroad was the first industry to come to this quiet, peaceful place.

Bonds were issued for the project and by the spring of 1866, work commenced in Kansas City, and grading and bridging was completed to Olathe, Kansas. That same year, a treaty was made with the Cherokee to cede the Cherokee Neutral Lands to the United States. The land, located in Crawford, Cherokee, and Bourbon Counties, was then to be sold for the benefit of the Indians. However, this created a number of disputes between white settlers who had “squatted” on the land and those that were trying to buy property. During this time the directors of the Kansas & Neosho Valley Railroad were unable to obtain the needed property to build through the Cherokee Neutral Lands.

However, the property was obtained by a Boston group represented by a man named James F. Joy, president of the Chicago, Burlington, and Quincy Railroad system in August 1868. The previously issued bonds were then withdrawn and given over to Joy and his group, who obtained the railroad. The name was then changed to the Missouri River, Fort Scott & Gulf Railroad Company in August 1868, and subsequently to the Kansas City, Fort Scott & Gulf Railroad Company.