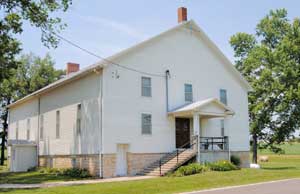 Lone Star, Kansas, an unincorporated community in Douglas County, is officially an extinct town today. It was first settled in 1854 by pro-slavery advocates from the south who wanted slavery to be legal in Kansas Territory. However, by 1860, it was clear that Kansas would be admitted to the Union as a Free State and many of the first settlers returned to the south.

When William Quantrill raided Lawrence in 1863, some of his men traveled down south and passed near Lone Star.

A post office was established in the settlement in April 1875 which was called “Bond”, for the name of its first postmaster. However, the post office was short-lived and closed in February 1876. 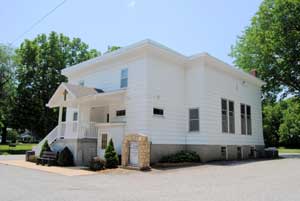 An active church in Lone Star, Kansas by Kathy Alexander.

More than a decade later, the town’s name was changed to Lone Star when a group of settlers saw a star in the sky while trying to think of a suitable name for their community’s school. The post office reopened in October 1899 under the new name.

In 1910, the village had a money order post office, some local trade, and a population of 75.

Today, the old village, which is officially part of Lawrence, consists of a smattering of homes and the Lone Star Church of the Brethren. The old townsite is located seven miles southwest of Lawrence. 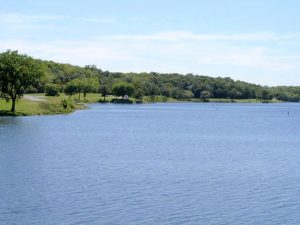